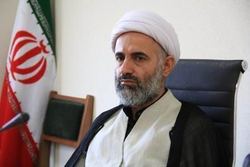 Rasa – The representative of West Azerbaijan in the Assembly of Experts said that the errors ‎by some clergymen and seminarians must not be blamed on the seminaries and added, ‎‎“Serving the Islamic Revolution and the Islamic system is the inherent duty of the Islamic ‎Seminaries.” ‎

RNA – In an exclusive interview with Rasa News Agency, Hujjat al-Islam Askar Dirbaz, the ‎representative of the people of West Azerbaijan province in the Assembly of Experts, ‎referring to the fact that the Islamic Revolution originated from the Islamic Seminaries and ‎said, “After the Islamic Revolution, the seminaries fully served the Islamic system of ‎government and evidence of this is the presence widespread of clerics in the battlefields of ‎the Imposed War [Iran-Iraq War] and their help of the warriors of Islam.”‎
‎ ‎
The dean of the University of Qom explained the role of the seminaries after the Imposed ‎War and stated, “After the Holy Defence era, the clergy played important roles in various ‎fields such as building and trying to achieve the ideal of justice.” ‎

Hujjat al-Islam Dirbaz argued that the errors by some clergymen and seminarians must not ‎be blamed on the seminaries and said, “The clerical institution has been at the service of the ‎Revolution and the Islamic system from the outset and this is the inherent duty of the clerical ‎society. The clerics’ efforts are always to protect the manner of the seminarians and to ‎strengthen their social connections.”‎

Emphasizing that the sympathy of the clergy with the people is evident in the current ‎conditions facing society wherein the people are suffering from economic constraints, His ‎Eminence said, “The living standards of many scholars and seminarians are lower than the ‎living standards of many low-income groups in society, but at the same time they are on the ‎side of the people and they are defending their interests by reminding the government and ‎the authorities.”‎

He said that the leaders of the three branches of government must resolve the people’s ‎livelihood problems through solidarity and unity and said, “The authorities must know that if ‎the economic process of the country does not change and the problems of the people are ‎not resolved, then the Islamic Revolution will be damaged.”‎

Hujjat al-Islam Dirbaz pointed out that the crisis of inflation, unemployment and other social ‎damage must be curtailed and said, “We have a positive and clear vision that and with its ‎implementation in the near future, the situation of the society will improve. The most ‎important and best solution to the problems of the country and reaching a clear horizon is to ‎follow the directions of the Supreme Leader of the Islamic Revolution [Ayatollah Khamenei].”‎

Tags: Dirbaz Islamic Revolution Seminary Iran
Short Link rasanews.ir/201rEI
Share
0
Please type in your comments in English.
The comments that contain insults or libel to individuals, ethnicities, or contradictions with the laws of the country and religious teachings will not be disclosed