The strength of the Islamic Resistance Front increasing day by day 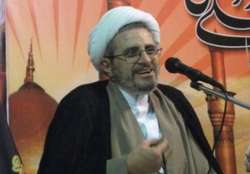 Rasa – Hujjat al-Islam Khidr Nouruddin said the Islamic Resistance Front [Hezbollah] is at its ‎highest level and its strength is increasing day by day.‎

RNA – In a speech delivered in the southern Lebanese city of Sidon, Hujjat al-Islam Khidr ‎Nouruddin, a member of the political council of the Lebanese Islamic Resistance group, ‎Hezbollah, called for a government to be formed the country as soon as possible, and ‎stated, “The government can solve the problems of the people and reduce their sorrows.”‎
‎ ‎
The Lebanese Shi’ah cleric added that the differences in the country must be resolved with ‎rationality and public participation, especially with the presence of Lebanese Prime Minister ‎Saad al-Hariri.‎

He stated that Syria, with the support of its people, its army and its allies, especially the ‎Islamic Resistance Axis, was able to achieve victory over terrorism and was prepared to ‎return to and regain its pivotal role in the region and Arab world and to confront the enemies ‎of the Islamic ummah, especially the Zionist regime occupying Palestine.‎
‎ ‎
Hujjat al-Islam Nouruddin continued, “Since its foundation in 1982, the Islamic Resistance ‎‎[Hezbollah] has never been as powerful in any period as it is today and its strength is ‎increasing day by day. This is due to the people around them and its integration with the ‎national army‎.”‎

Lebanon has been facing a political deadlock since its first parliamentary vote in nine years ‎was held in May. Despite the election, lawmakers have since failed to form a government.‎

Hezbollah and its political allies secured over half of the seats.‎

Tags: Nouruddin Lebanon Hezbollah Hariri Islamic Resistance
Short Link rasanews.ir/201rDb
Share
0
Please type in your comments in English.
The comments that contain insults or libel to individuals, ethnicities, or contradictions with the laws of the country and religious teachings will not be disclosed