Security is the bedrock of all progress in society 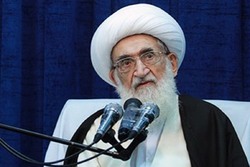 Rasa – In recognition of the efforts of the Law Enforcement Force to increase the authority ‎of the country and provide security to society, the revered source of emulation stressed, ‎‎“Security is the bedrock of all progress.”‎

His Eminence acknowledged religious democracy as among the achievements of the Islamic ‎Revolution and said, “The Islamic Revolution has liberated the people from tyranny and ‎colonialism. Due to the blessings of the Islamic Revolution, security, honesty and purity ‎exists in the country and we must be grateful for this.”‎
‎ ‎
Ayatollah Nouri-Hamadani commended the activities of the Law Enforcement Force in ‎increasing the authority of the country and safeguarding the security of society and said, ‎‎“Security is the bedrock of all developments and the service of the armed forces is one of ‎the greatest services. The Islamic Revolution changed the infrastructure and brought people ‎to work who have faith and belief.”‎

Tags: Nouri-Hamadani Nouri Islamic Revolution Wilayat al-Faqih
Short Link rasanews.ir/201rDD
Share
0
Please type in your comments in English.
The comments that contain insults or libel to individuals, ethnicities, or contradictions with the laws of the country and religious teachings will not be disclosed