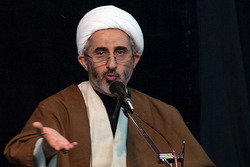 Rasa – Hujjat al-Islam Rostamnejad said, “Dozens of disciplines and fields of knowledge ‎have been established in the seminary and one can claim that today, the seminaries have ‎the most diverse system of disciplines in the Islamic educational system.”‎

His Eminence said that almost fourteen centuries have passed in which the seminaries have ‎reached perfection so that it could form a powerful government based on Wilayat al-Faqih ‎‎[Guardianship of the Jurisprudent] and added, “It’s natural that before and after the Islamic ‎Revolution that there have been many differences in many aspects, especially in terms of ‎science and scientific achievements.”‎

He stated, “The first axis of the work of the seminaries is the development of the boundaries ‎of knowledge and the diversification of specialized religious disciplines. These are among the ‎most valuable works of the seminaries in the post-revolutionary period. The seminaries must ‎enter into new realms and respond to the needs of the Islamic system and society.”‎

Hujjat al-Islam Rostamnejad added, “The seminaries that previously almost exclusively ‎discussed jurisprudence and the principles of jurisprudence, after the Islamic Revolution, ‎entered a new arena and today, dozens of disciplines and fields of knowledge have been ‎established in the seminary and one can claim that today, the seminaries have the most ‎diverse system of disciplines in the Islamic educational system.”‎

He explained that the second axis of the valuable work of the seminaries is their serious ‎focus on new issues in jurisprudence and said, “The seminaries are seeking to solve the new ‎jurisprudential issues required by the system and society, and after that, the glorious Islamic ‎Revolution occurred and dozens of issues came to the fore in regard to which the seminaries ‎must enter and give an appropriate response.”‎

Tags: Rostamnejad Iran Seminary Islam Education
Short Link rasanews.ir/201rCw
Share
1
Please type in your comments in English.
The comments that contain insults or libel to individuals, ethnicities, or contradictions with the laws of the country and religious teachings will not be disclosed