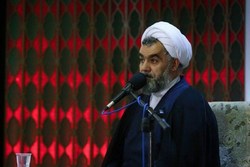 Rasa – The head of the Supreme Assembly of Basij of Qom province emphasized that the ‎seditionists of 2009 were an extension of the same seditionists as at the dawn of Islamic ‎history.‎

RNA – Hujjat al-Islam Hoseyn Joushghaniyan, the head of the Supreme Assembly of Basij of ‎Qom province, said that the martyrs are present and observing all of our actions and noted, ‎‎“Today, the martyrs are undoubtedly witnessing that our movement is in line with the ideals ‎of the two revolutionary Imams [Imam Khomeyni and Imam Khamenei].”‎

Referring to the strength, firmness and resistance of the Iranian people during the Imposed ‎War [Iran-Iraq War], he stated, “The enemies can never have a proper idea of the power of ‎the front of the Islamic Revolution because God always supports the front of Islam. For this ‎reason, the enemies’ calculations are always met with defeat.”‎

He said that the overthrow of the Islamic system is impossible and stressed, “Today’s ‎problems are the twists and turns of history that people are experiencing. The Revolution will ‎continue its movement with power because this promise that Imam Khomeyni has given to ‎us.”‎

Emphasizing that the seditionists of 2009 were an extension of the same seditionists as at ‎the dawn of Islamic history, Hujjat al-Islam Joushghaniyan stated, “These seditious people ‎didn’t accept the leadership of the Supreme Leader of the Islamic Revolution [Imam ‎Khamenei] for nine months, then they came back for their own worldly interests. We won’t ‎forget that the leaders of the sedition provided the grounds for the interference of foreigners ‎and disturbances in society.”‎

He said that the presence of the people has always thwarted the enemies’ conspiracies and ‎noted, “Today, we must overcome the new sedition of the enemies and maintain solidarity ‎through resistance and vigilance.”‎

Tags: Joushghaniyan Islamic Revolution Khamenei Sedition
Short Link rasanews.ir/201rCg
Share
0
Please type in your comments in English.
The comments that contain insults or libel to individuals, ethnicities, or contradictions with the laws of the country and religious teachings will not be disclosed