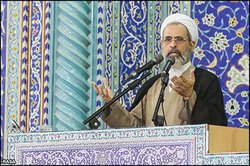 Rasa – Ayatollah Arafi referred to the foolish statements made by US President Trump and ‎insisted that the current president of the United States, like his predecessors, would take his ‎wishes to separate the Iranian people from the Islamic Revolution to the grave.‎

RNA – In his Friday prayer sermon to a large and fervent crowd of believers at Qom’s Qods ‎Prayer Hall, Ayatollah Alireza Arafi commemorated the anniversary of the 9th of Dey ‎‎[December 30th] uprising and said, “The clerics and the people of Qom were the pioneers of ‎the Islamic Revolution and the 9th of Dey was the beginning of this great divine movement in ‎Iran and the world.”‎

The head of the Islamic Seminaries of Iran also commemorated the memory of Ayatollah ‎Sayyid Mahmoud Hashemi-Shahroudi and described this great figure as the bright face of the ‎seminary and the clergy who spent his life on the path of jurisprudence and defending Islam ‎and the Revolution.‎

He honoured the Goharshad Mosque rebellion and the martyrs on the path of chastity and ‎the hijab and said, “These individuals stood in defence of the transcendental moral values ‎against the evil attacks by Reza Pahlavi. Everyone, in particular those in Qom, must strive ‎for the commandment of chastity and the hijab and the rule of the values of divine ‎transcendentalism are strengthened in women and men. The pioneers of the Goharshad ‎Mosque rebellion are our guides to consolidating the values of chastity and hijab.” ‎

The Goharshad Mosque rebellion took place in 1935, when a backlash against the ‎westernizing and secularist policies of Reza Pahlavi erupted in the Holy Shrine of Imam al-‎Ridha in Mashhad.‎

Ayatollah Arafi said, “Some of the manifestations of today aren’t consistent ‎with the true ‎culture of Islam, the Revolution and Iran and aren’t compatible with the progressive and ‎luminous culture of Qom. All must endeavour to make good plans and correct guidance so ‎that the manifestations of corruption can be prevented and so that modesty and chastity are ‎at the top of the agenda.”‎

Referring to the foolish statements recently made by Donald Trump, the member of the ‎Society of Seminary Teachers of Qom added, “At the beginning of the new year, the ‎president of the United States, just like in the past, made foolish statements that have no ‎value. He has claimed that the regional power and national cohesion of Iran have been ‎reduced but in order to understand the coherence and authority of the Iranian nation, we say ‎to this great traitor of the century, ambition for you weak-minded old and senile people is ‎not a defect.” ‎

He said that the United States hopes that Iran’s power in the region has decreased and the ‎people have been separated from the ideals of Islam and the Revolution and addressing ‎President Trump, said, “Your predecessors had made wishes over the past few decades but ‎they took their wishes to the grave and, with your divine favour, the usurping rulers of Israel ‎and your lackeys will take those wishes to the grave and the great nation of Iran will stand ‎against you with the shout of ‘death to America!’”‎

Ayatollah Arafi added, “With the cry of ‘death to America,’ this revolutionary and passionate ‎passion is still alive, and this divine voice will never be silenced against the United States, ‎Israel, and the enemies.”‎

Tags: Arafi Qom Friday Prayers Islamic Revolution
Short Link rasanews.ir/201rCO
Share
0
Please type in your comments in English.
The comments that contain insults or libel to individuals, ethnicities, or contradictions with the laws of the country and religious teachings will not be disclosed