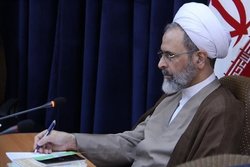 Rasa – The head of the Islamic Seminaries of Iran said, “Jesus Christ is one of the greatest ‎prophets. His birth was such a great blessing for mankind that God gave glad tidings to his ‎mother, Mary, before his birth.”‎

RNA – In a letter, Ayatollah Alireza Arafi, the head of the Islamic Seminaries of Iran, ‎congratulated Pope Francis and the Christians of the world on the new Gregorian year and ‎the birth of Jesus Christ: ‎

In the Name of God, the Most Gracious the Most Beneficent

To His Eminence Pope Francis, the Leader of the Roman Catholic Church,‎

I would like to extend my most heartfelt congratulations to you, to all the Christians and ‎Muslims of the world, and to all of those who seek peace and justice in the world, on the ‎birth anniversary of Jesus Christ.‎

The divinely-sent messengers were extraordinary men whose mission was to call all human ‎beings to fulfill their covenant with their Creator, promising them a felicitous life in the ‎Hereafter in return. They sought to solace the bereaved, shelter the helpless, heal the sick, ‎and relieve human pains.‎

They have been beacons of guidance for their true followers in the darkness of uncertainties, ‎and their teachings have served to revive the dead hearts. Their exemplary conduct has been ‎a guide for mankind as to a pure life, something that any worshipper of God deserves.‎

Jesus Christ is one of these prophets, and among the greatest ones. His birth was such a ‎great blessing for mankind that God gave glad tidings to his mother, Mary, before his birth:‎

‎“Oh Mary! God gives you glad tidings of a Word from Him, whose name is the Messiah, ‎Jesus son of Mary; he will be honored in this world and the Hereafter and will be among the ‎near-stationed [to God].” [Quran, 3:45]‎

During his short yet extremely fruitful time as prophet, he never cease to make every ‎attempt to guide the people. He traveled from town to town day and night in order to ‎deliver the message of God to His servants.‎

He ate simple food and dressed plainly and spent most of his time with the poor and the ‎needy in order to sooth them and relieve their pain. He never tried to win the favour of the ‎tyrants and kept away from them. He censured the hypocrites who used religion as a cover ‎for their wrongdoings, and accepted the sincere people who sought to walk the path to the ‎truth with open arms.‎

He confirmed Moses’ religion and fulfilled The Law and he guided his followers to a correct ‎understanding of that religion and acting based on its teachings. He promoted the love of ‎God and that of His servants as the essence of the teachings of all prophets and he never ‎accused man of having a foul nature.‎

Those who truly loved him never submitted to the will of oppressors. They made every ‎effort to help the oppressed and soon they were joined by many other people all around the ‎world.‎

And today, more than ever, the world needs to follow his lead so that the blessed ways of ‎the divinely-sent prophets may be revived in the world, and that the world may become ‎worthy of meeting him one more time. Amen.‎

As the head of the Islamic Seminaries in Iran, I would like to offer you and all the Christians ‎of the world my heartiest congratulations on the occasion of the blessed birthday of Jesus ‎Christ (may peace and blessings be upon him).‎

Alireza Arafi
Head of the Islamic Seminaries of Iran

Tags: Arafi Pope Francis Christmas New Year Vatican Catholic Ro
Short Link rasanews.ir/201rC9
Share
0
Please type in your comments in English.
The comments that contain insults or libel to individuals, ethnicities, or contradictions with the laws of the country and religious teachings will not be disclosed