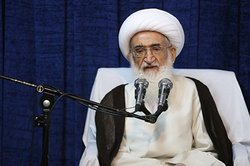 Rasa – The revered source of emulation highlighted the popularity of Iran’s 1979 Islamic ‎Revolution and said it has become a role model for movements and uprisings in other ‎countries.‎

RNA – In a meeting with a number of students from Lebanon in the holy city of Qom, Grand ‎Ayatollah Hoseyn Nouri-Hamadani said, “Thank God, the development that was created by ‎Imam Khomeyni (the founder of the Islamic Revolution) is expanding day by day.”‎

He added that many movements and uprisings that have taken place in other countries ‎around the world have been inspired by Iran’s Islamic Revolution and the thoughts of Imam ‎Khomeyni. ‎

The Iranian nation toppled the US-backed Pahlavi regime on February 11, 1979, ending the ‎‎2,500 years of monarchy in the country.‎

Tags: Nouri Iran Islamic Revolution
Short Link rasanews.ir/201rBZ
Share
0
Please type in your comments in English.
The comments that contain insults or libel to individuals, ethnicities, or contradictions with the laws of the country and religious teachings will not be disclosed