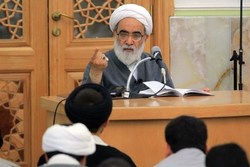 The jurisprudent member of the Guardian Council said, “The Quran has said that if you help God, he ‎will help you and grant you stability. All praise be to God, we are witnesses of this result among Iranian ‎people. The people have always demonstrated their loyalty to the Islamic Revolution.” ‎

RNA – Speaking during his class in Qom’s Grand Mosque, Ayatollah Mohammad-Mahdi Shabzendehdar, a ‎jurisprudent member of the Guardian Council, commemorated the epic of the 9th of Dey [December 30th] ‎and said, “The epic of the 9th of Dey reminds us of the steadfastness of the mawali, the non-Arab followers ‎of the Ahlul-Bayt, and the loyalists of the divine, Islamic and revolutionary ideals against the enemies’ ‎attacks.” ‎

The member of the Society of Seminary Teachers of Qom added that the 9th of Dey must be considered as a ‎‎“Day of God” and stated, “The Quran has said that if you help God, he will help you and grant you stability. ‎All praise be to God, we are witnesses of this result among the non-Arab followers of the Ahlul-Bayt in the ‎country of the Ahlul-Bayt who have been steadfast in the forty years since the Islamic Revolution. The ‎people have always demonstrated their loyalty.” ‎

Ayatollah Shabzendehdar argued that there have been a lot of ups and downs for the Iranian people but all ‎praise be to God, they have passed the divine tests with pride and said, “This issue is the result of the ‎victories that some have had with a pure intention and loyalty to Islam and the Ahlul-Bayt.” ‎

He emphasized, “If such loyalty existed among the Muslims, the Muslim world wouldn’t have suffered from ‎disasters after the passing of the Prophet Muhammad until the Greater Occultation. Loyalty is the secret of ‎the survival of the Islamic Revolution. Perseverance and not erring on the path that the enemies or insiders ‎don’t give attention to is the cause of divine victory. The revolution of trust is in the hands of the people and ‎the authorities and its protection is necessary for its continuation.”‎

Ayatollah Shabzendehdar said, “Mankind must know the value of the divine blessings and if, God forbid, one ‎shows ingratitude and isn’t thankful in regard to the blessings that he has been given, God Almighty doesn’t ‎guarantee that these blessings will continue. At the time of the rule of the Ahlul-Bayt, when the people ‎weren’t loyal, they were deprived of these great blessings.”‎

He stressed that divine rulings must be explicitly explained and we must be grateful for the divine blessings ‎and know that if we have been thankful for God’s blessings, we will have God’s favour and said, “We see ‎respect of the rules of religion and divine assistance in the Supreme Leader of the Islamic Revolution ‎‎[Ayatollah Khamenei] and he believes in divine assistance in a determinant and decisive manner and he ‎continues the path of the late Imam Khomeyni with sincerity and precision as his successor and as a ‎righteous man.”‎

Tags: Shabzendehdar Iran Islamic Revolution 9 Dey
Short Link rasanews.ir/201rBH
Share
0
Please type in your comments in English.
The comments that contain insults or libel to individuals, ethnicities, or contradictions with the laws of the country and religious teachings will not be disclosed