Giving key posts to seditious people is a great mistake 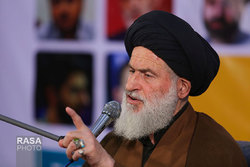 Rasa – The representative of Mazandaran in the Assembly of Experts emphasized that the ‎awakened nation will not be harmed and said, “The revival of the anniversary of the 9th of ‎Dey is like the revival of the revolutionary zeal of the Iranian people.”‎

RNA – In an exclusive interview with Rasa News Agency, Ayatollah Sayyed Rahim Tavakkol, ‎the representative of the people of Mazandaran province in the Assembly of Experts, said ‎that the sedition of 2009 was pre-designed and its consequences are still present in Iran and ‎said, “If we want to forget the sedition and be heedless of the plans of the hypocrites and ‎the enemies, there is no doubt that the enemies will advance.”‎

The Iranian politician said that the enemies are seeking to make the Iranian people unaware ‎of the sedition, saying, “By creating unawareness among society in regard to the sedition, ‎the enemies want to instigate other seditious plans and programs in the country. Therefore, ‎if the people have insight and remember the creation of epics, the enemies will be hopeless ‎in achieving their sinister goals.” ‎

Ayatollah Tavakkol emphasized that the awakened nation will not be harmed and said, “The ‎‎9th of Dey [December 30] is the best opportunity to recognize the enemies, the sedition and ‎the hands behind the curtain and to demonstrate the method of counteracting the anti-‎revolutionary movements. On this basis, the revival of the anniversary of the 9th of Dey is ‎like the revival of the revolutionary zeal of the Iranian people.”‎
‎ ‎
He said that by the establishing the sedition of 2009, the enemies were pursuing a plot to ‎overthrow the Islamic Republic, said, “If the epic of the 9th of Dey did not exist, the enemies ‎would achieve their evil goals, and the righteous, just and truthful people would be bypassed ‎and weak and oppressed people would come to the fore.”‎

Referring to the consequences and dangers of the presence of the seditionists among the ‎country’s authorities, Ayatollah Tavakkol emphasized, “When these kinds of people have ‎authority in the country, it is evident that they are always seeking seditiousness, so these ‎people must be identified and removed from key posts and if they express remorse and ‎repent, do not act with them but giving key posts to these people is a great mistake.”‎

On December 30, 2009, millions of Iranians held nationwide protests to condemn the ‎foreign-orchestrated unrest which had erupted following the presidential elections earlier that ‎year.‎

People were especially angered by incidents that had taken place days earlier in Tehran, ‎where a group of demonstrators offended the sanctities of the nation on the day of Ashura, ‎the martyrdom anniversary of Imam al-Husayn. the third Shi’ah Imam.‎