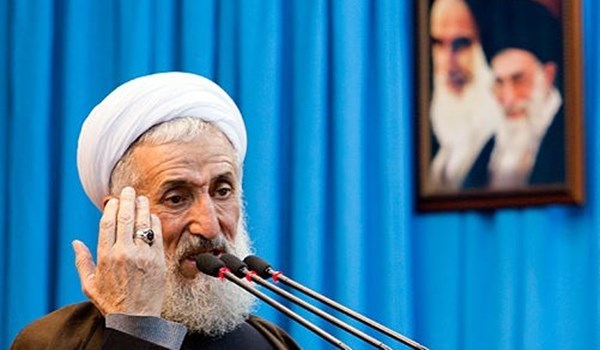 RNA - Addressing a large and fervent congregation of the people in Tehran on Friday, Hojjatoleslam Seddiqi said, "The IRGC's missile strikes showed that it will not take too long for the enemies to see Iran's crushing response."

He noted that the terrorist received the IRGC's blow first in Iraq and then more recently in Syria, and said, "Our missiles targetted Daesh (the ISIL) positions in Syria from hundreds of kilometers away, killing 40 people."

He hailed the IRGC forces' deterrence and defensive power.

The missiles fired at the terrorists' positions in Eastern Syria hit the targets with high precision and killed 40 terrorists, based on preliminary reports.

During the operations codenamed Zarbat-e Moharram (Blow of Moharram) the headquarters of Takfiri terrorists near Albu Kamal region in Eastern Euphrates was attacked from Kermanshah province in Western Iran, 570km away from the targets.

The statement said on September 9 that the missile strikes were launched after the terrorist group launched attacks on bordering areas in Iran, fomented insecurity and conducted sabotage acts in West Azarbaijan, Kurdistan and Kermanshah provinces in Western Iran.

"The IRGC Aerospace Force's missile unit in cooperation with the IRGC Ground Force's drone unit targeted the headquarters and a meeting of the leaders of a filthy and criminal grouplet and a center for training affiliated terrorists with 7 short-range ground-to-ground missiles yesterday (September 8)," it added, noting that the center was destroyed and tens of leaders and key agents of the grouplet were killed and wounded.

The statement underlined that the missile attacks were launched after the ringleaders of the terrorist groups neglected the serious warnings of the Iraqi Kurdistan region officials about the Islamic Republic's determination to remove their bases and end their aggressive and terrorist acts against Iran.

It underlined the Iranian security and Armed Forces' vigilance to safeguard the country's territories, warning the terrorist groups that there will be more crushing response if they risk to resume attacks on the Islamic Republic.

On September 8 morning, Iranian missiles targeted the headquarters of the KDP-I and the Democratic Party of the Iranian Kurdistan (PDKI) terrorist groups in Koya.

The missiles specifically targeted the KDP-I’s political bureau, the PDKI’s training center, and a Peshmerga complex.

According to the KDP-I’s statement, the bombardment killed 14 members of the two parties and injured 40 more. The Secretary of KDP-I, Mustafa Mawludi, and his predecessor, Khalid Azizi, were also among those wounded during the attack.

The statement mentioned that two Peshmerga members of the other party, the PDKI, were also killed and their names are yet to be announced.

The KDP-I added that two other members of its party are yet to be found, and are believed to be trapped under the rubble of buildings hit by missiles.

Tags: IRGC Seddiqi
Short Link rasanews.ir/201qgc
Share
0
Please type in your comments in English.
The comments that contain insults or libel to individuals, ethnicities, or contradictions with the laws of the country and religious teachings will not be disclosed