US Not Trustworthy for Talks 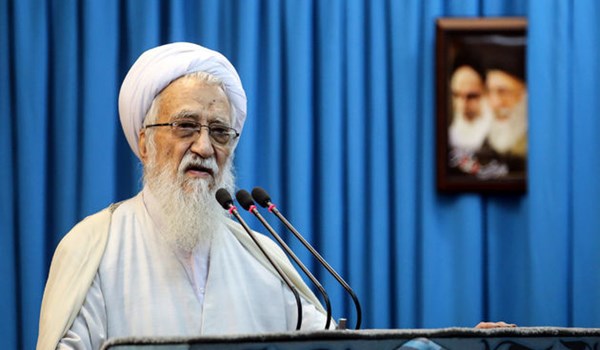 RNA - Addressing a large and fervent congregation of the people in Tehran on Friday, Ayatollah Movahedi Kermani said, "We cannot hold talks with the US and as Supreme Leader of the Islamic Revolution (Ayatollah Seyed Ali Khamenei) has said the Americans expect the other side to fulfill all its commitments, but when it comes to fulfillment of their pledges they tear up the agreements."

He underlined that the US will not remain committed to the outcome of its talks with Iran, and said, "The US president is a liar."

In relevant remarks in mid-August, Ayatollah Khamenei underlined that Iran would not sit at the negotiating table with Washington, and declared a strong ban on talks with the US.

"Recently, the US officials have been talking blatantly about us. Beside sanctions, they talk about war and negotiations. They talk about a spirit of war to frighten the cowards," Ayatollah Khamenei said, addressing a large number of Iranian people from all walks of life in Tehran.

Ayatollah Khamenei explained to the audience why Iran has decided not to negotiate with the United States, and asserted, "Why won’t we negotiate? The US negotiations formula is this; because the Americans rely on money and power, they consider negotiations as a commercial exchange; when the US wants to negotiate with a party, they determine their main goals, and then they won’t retreat even a step away from these goals; they demand the other party to pay a privilege immediately; and if the other party refuses to comply with them, they start to make a fuss, so the other party would surrender; the US itself does not pay anything in exchange for what it takes from the other party; the US only makes strong promises in order to enchant the other party with mere promises; in the final stage, after receiving all the immediate advantages, the US breach their own promises."

"This is the method of the American negotiations. Now should we negotiate with such a fraudulent government? The JCPOA was a clear example of this," Ayatollah Khamenei said, and added, "Even if we ever - impossible as it is - negotiated with the US, it would never ever be with the current US administration."

The Leader of the Islamic Revolution slammed US rhetoric towards Iran, and stated, "The US has become more blatant and ruder in their rhetoric over the past few months. Previously they were not so observant of diplomatic etiquette in their speech either; however, they have become ruder towards all nations."

Ayatollah Khamenei drew an example of US’s blatancy in actions and rhetoric, and said, "The example of it is that during the last week, the Saudis committed two crimes: attacking a hospital and attacking a school bus with 40 or 50 innocent children on board. Do you have 8 or 9 year-olds at home? This is a dramatic tragedy. It truly breaks one’s heart. The news shook the global conscience. But how did the US react? Instead of condemning the crime, the US said, “We have strategic relations with Saudi Arabia.” Is this not shamelessness? What the US president did to two or three thousand children by separating them from their parents, putting them in cages because they were immigrants is an unprecedented crime in history."

Ayatollah Khamenei also addressed the recent economic problems of the country, calling "internal factors" as the source of the crisis.

"Scholars and many officials believe that the problem is internal. The problem of gold coin and foreign currency unfolded due to negligence and mismanagement," he said.

According to Fars News Agancy, Ayatollah Khamenei stressed that sanctions may play a role in creating the current economic situation, but that domestic factors are stronger role players on the matter.

"Not that sanctions are not playing a role, but the main reasons lie in the measures taken within the country. If actions are taken more efficiently, more prudently, more swiftly and more firmly, sanctions cannot have much effect and they can be resisted."

"A stupid man tells the Iranian nation that our government spends our money on Syria. This is while his boss - the US president - has admitted that he has spent 7 trillion dollars in the Middle East without gaining anything in return," he said.

The Iranian leader further dismissed any chance for war between Tehran and Washington, saying, "No war will occur as, like before, we will never initiate a war; the US won't launch a war either because they know that it would certainly end to their detriment; this is because the Islamic Republic and Iranian nation have proved that any transgressor will be stricken a bigger blow. Even Reagan, the then President of the US - who was more powerful than the recent presidents - secretly sent McFarlane to Tehran for negotiations but he had to return after 24 hours without any outcome."

Tags: Movahedi Kermani US Iran Trump
Short Link rasanews.ir/201qFv
Share
0
Please type in your comments in English.
The comments that contain insults or libel to individuals, ethnicities, or contradictions with the laws of the country and religious teachings will not be disclosed