Rasa - Tehran's provincial Friday Prayers Leader Hojjatoleslam Seyed Mohammad Hassan Aboutorabifard underlined the importance of the Supreme Leader of the Islamic Revolution Ayatollah Seyed Ali Khamenei's insistence that the government should do its best to meet the resistance economy objectives. 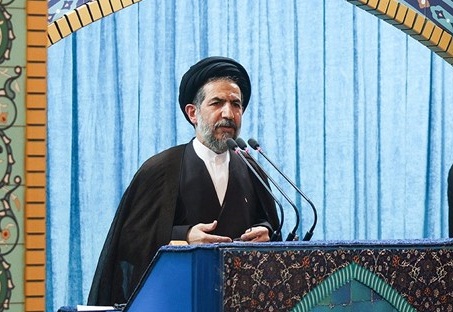 RNA - Addressing a large and fervent congregation of the people in Tehran on Friday, Hojjatoleslam Aboutorabifard said, "If sanctions make Iran produce valuable derivatives from crude, this will be a success and we can confront the sanctions."

He called on senior Iranian officials to do their best to pass through the current situation and reach better days in the near future.

The senior cleric called for using the Economy of Resistance policies outlined by the Supreme Leader (Ayatollah Khamenei) to thwart the US sanctions.

Tags: Friday Prayers Aboutorabifard
Short Link rasanews.ir/201qF0
Share
0
Please type in your comments in English.
The comments that contain insults or libel to individuals, ethnicities, or contradictions with the laws of the country and religious teachings will not be disclosed