US sanctions not the main reason for economic turmoil, livelihood problems in Iran

Rasa – Ayatollah Sa’idi said that senior officials must not assume that the American sanctions are the main reason for the economic turmoil and livelihood problems of the people. 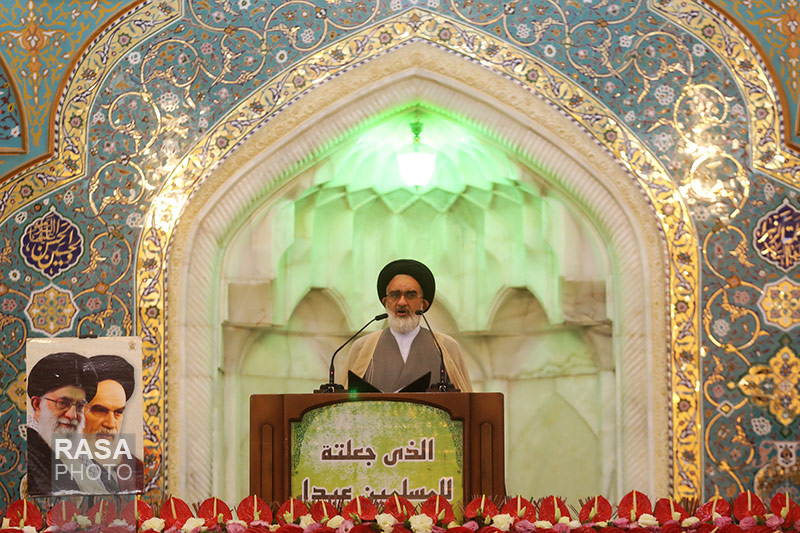 RNA – In his Friday prayer sermon delivered to a large and fervent crowd of believers in Qom’s Qods Prayer Hall, Ayatollah Sayyed Mohammad Sa’idi referred to Islamic Resistance Day and stated, “In the 2006 33-Day War, Lebanon’s Hezbollah demonstrated that the path to victory against the spiteful and obstinate enemies is through resistance, not negotiation.”

The custodian of the Holy Shrine of Lady Fatimah al-Ma’sumah pointed to the demands of the Supreme Leader of the Islamic Revolution, Ayatollah Sayyed Ali Khamenei, for the three branches of government to reform the economic situation and to solve the livelihood problems of the people and added, “At the national, regional and the international levels, the Islamic Revolution has shaken the foundations of the arrogant imperialist system led by the United States and international Zionism through its strategic progress and the Islamic Resistance Front has imposed heavy defeats on them.”

Ayatollah Sa’idi said, “The solution to overcome the weaknesses, damages and economic disruptions is through continuous production, the protection of national authority, the protection and promotion of security, better and greater services to the people, the protection of national solidarity and unity, the strengthening of the revolutionary spirit, the strengthening of determination and will of the people, the hope and the implementation of the policies of the Resistance Economy, the employment of pro-resistance officials, the operationalization of decisive instructions and the explanations of the Supreme Leader which have been explained to the leaders of the three branches of government, especially to the administration of the president [Hasan Rouhani].”

The representative of the Supreme Leader in Qom said that senior officials must not assume that the American sanctions are the main reason for the economic turmoil and livelihood problems of the people and said, “For 40 years, Iran has been sanctioned by the United States but the nation has demonstrated that the sanctions are against their determination, will and faith have never worked and will never work.”

He added, “The source of the economic turmoil and livelihood problems for the people is the weakness in the management of the economy and the employment of individuals who lack confidence in the policies of the Resistance Economy and associating national interests, security and economic openness to foreigners.”

Ayatollah Sa’idi stressed, “In order to solve the economic problems facing the country, it is necessary to create financial discipline and reform the banking system. Unfortunately, the high level of liquidity and the Central Bank’s attachment to the government disrupted the flow of money and caused inflation and recession. The Supreme Economic Coordinating Council, especially the government and the parliament, must present a two-stage bill and a plan to control the volume of high liquidity and direct it towards production and employment and also, they must consider the seriousness of the independence of the Central Bank from the executive branch.”

His Eminence said that urgent assistance for the disadvantaged and the oppressed must be on the agenda of the officials and added, “High prices and unemployment have brought a double burden on the people, which must eliminate these pressures. One of the policies of the government is to eliminate absolute poverty and therefore, it is expected that the Supreme Economic Coordination Council will act in practice to eradicate poverty, corruption and discrimination.”

Referring to the complaints of the people’s toward some government bodies, the Friday prayer leader of Qom said, “The people are very honest, patient, revolutionary and obedient to the Supreme Leader and support Wilayat al-Faqih [Guardianship of the Jurisprudent] and they appreciate the officials who are trying to solve the problems but they complain about some officials and government bodies because some bodies rules prolong the process of dealing with people’s problems with cumbersome.”

Ayatollah Sa’idi said, “Everyone must be careful and take God into consideration and set aside political lines and considerations. We must take steps to promote Islam and the system, respect the martyrs and the Supreme Leader in the face of misconduct and deal with those who do not perform their duties.”