Rasa – The revered source of emulation said, “We must not allow a few individuals who are involved in corruption and mismanagement to undermine the inefficiency of the Islamic system of government and encroach on the rights of the people.” 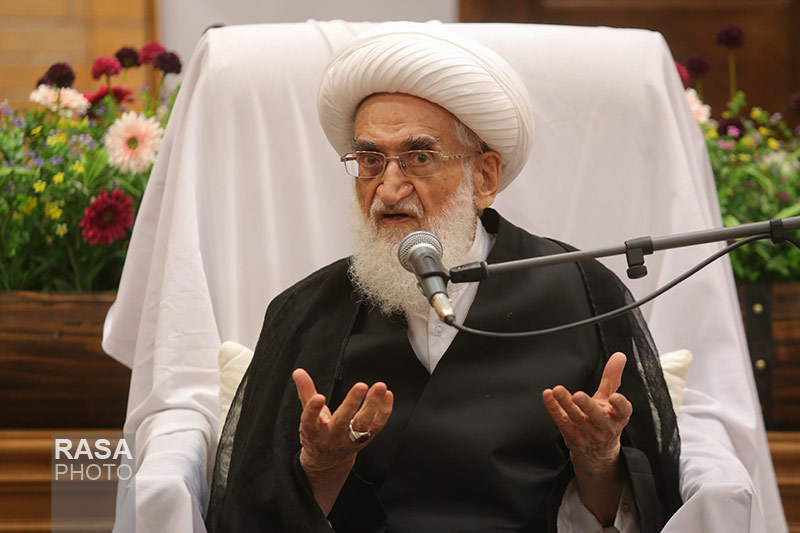 RNA – In a meeting with a number of professors from the higher and kharij levels of the Islamic Seminary of Qom, Grand Ayatollah Nouri-Hamadani offered recommendations to government officials in which he requested honesty in speech, the implementation of promises and the resolving of the economic problems facing Iran.
The revered source of emulation said that associating all the affairs of the country with the sanctions as “incorrect” and added that proper and specialized management to monitor and fight corruption as one of the ways to solve the country’s problems.

Arguing that scholars and clerics must speak the language of the people and convey the demands of the people to the officials and said, “The people must not be disappointed with the system, the Islamic Revolution and the clergy because throughout history, the scholars relied on the people and if someone was oppressed, they would go to the doors of the houses of the scholars.”

Ayatollah Nouri-Hamadani considered the clergy as a sanctuary for the people and said, “This is a matter of honour and this communication must not be disconnected. We don’t offer any courtesies to anyone in support of the demands of the people, support for the Islamic Revolution, the Islamic system and Wilayat al-Faqih [Guardianship of the Jurisprudent] and we will not be appeased because the people expect us to defend their rights and the slogans of the Islamic Revolution.”

The prominent teacher in the Islamic Seminary of Qom emphasized, “We must not allow a few individuals who are involved in corruption and mismanagement to undermine the inefficiency of the system and encroach on the rights of the people.”

Noting the hatred and hostility of the United States towards Iran, he said, “This animosity exists and will continue because they’re opposed to the Iranian people and during the past forty years, the worst acts of oppressions have been committed against the people of Iran. Our people understand the hostilities and for this reason they have been resisting and persevering for forty years but they are suffering from injustice, discrimination and corruption.”

Ayatollah Nouri-Hamadani said, “Muslim people have a clean nature and against oppression and don’t fall under the United States and its lackeys. The people won’t tolerate it. One steals the money of the treasury and others are in need of bread for the night.”

His Eminence stated, “I tell the officials ‘if the people are certain that you’re struggling against rent and corruption, they will support you.’ The officials must not associate everything to the sanctions because experience has demonstrated that many issues aren’t related to the sanctions. The actual prices of goods and oversight over the wealthy class will solve many of the problems.”

Ayatollah Nouri-Hamadani continued, “The officials must avoid dissension and marginal issues and try to solve the problems and rely on their own abilities through unity around the authority of Wilayat al-Faqih.”

In conclusion, he stated that the judiciary must seriously dealing with corrupters and said, “Imam Khomeyni said that the Islamic Revolution is the foundation for the reappearance [of Imam al-Mahdi] and God-willing, with the favour of God Almighty and the attention of Imam al-Mahdi and the support of the people, the Islamic Revolution will be protected.”