Rasa – The director of Rasa News Agency and a group of officials from this news agency have met with Ayatollah Seyyed Hashem Hoseyni-Bushehri, a member of the board of directors of the Assembly of Experts. 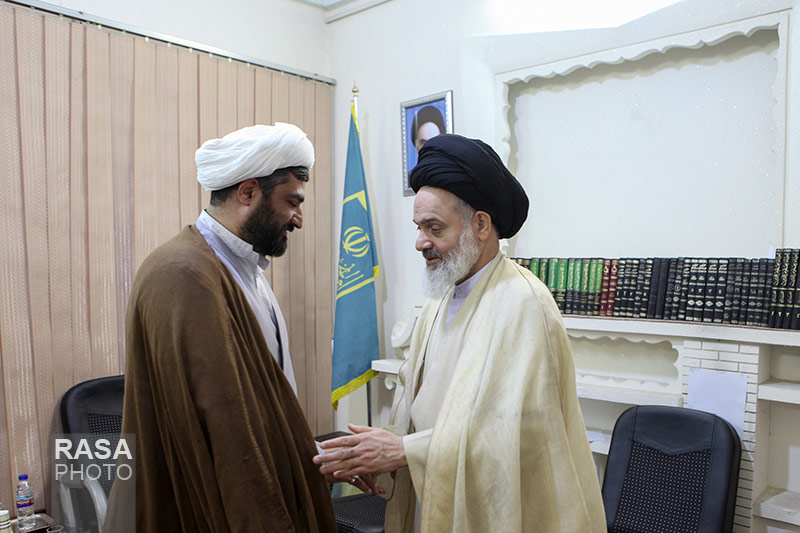 RNA – Hujjat al-Islam Mohammad-Mahdi Mohagheghi, the director of Rasa News Agency, along with a group of managers and officials from this news agency media, met with Ayatollah Seyyed Hashem Hoseyni-Bushehri, a member of the board of directors of the Assembly of Experts, on August 4.

Praising the support of Ayatollah Hoseyni-Bushehri for Rasa News Agency, he said, “The Rasa Institute is trying to protect the clerical identity and use the tool of the media to convey the messages of the Islamic Seminary and the duties that are related to the Islamic system of government.”

He added, “One of the emphases of His Eminence and other greats of the Islamic Seminary, has been the development, innovation and creativity in the news process at Rasa. Fortunately, effective measures have been taken in the direction of the transformation of the media organization, professionalism, the media reflection of the news, the scientific development of our colleagues, the launching of the academic publications and the realization of ambitious goals.”

Hujjat al-Islam Mohagheghi expressed gratitude to Ayatollah Hoseyni-Bushehri for his revolutionary positions and said, “Fortunately, Your Eminence is still active in various responsibilities with a strong motive and is a good model for the Basijis. All praise be to God, you continue to pursue activities with joy and revolutionary morale, which is worthy of appreciation.”

He said that providing information on the programs of the higher institutions of the Islamic Seminary is necessary and said, “The activities and actions of the Society of Seminary Teachers and the Supreme Council should reflect more on the students and provide the necessary information.”

Hujjat al-Islam Mohagheghi also spoke of the concerns of seminarians and students in regard to seminary issues and future of the Islamic Seminary to Ayatollah Hoseyni-Bushehri and emphasized upon the plans for a strategy for communication between the seminaries of Qom and Najaf.

Ayatollah Hoseyni-Bushehri also praised the activities of Rasa News Agency, “I came to the conclusion that Rasa News Agency is not only active as a news agency but also in a powerful, vibrant, hard-working and realistic set of realities.”

Ayatollah Hoseyni-Bushehri stated that the status of the news agency is to transfer a message, and added, “Because there was a vacuum, an organization such as Rasa News Agency was established. The main task of Rasa News Agency to convey the words of the Seminary, the main issues and views and the academic point of view and developments, especially in the field of jurisprudence.”

He said, “Fortunately, a group of distinguished and concerned seminarians with an effort, established Rasa News Agency and pursued works that are worthwhile.”