Rasa - Tehran's provincial Friday Prayers Leader Hojjatoleslam Seyed Mohammad Hassan Aboutorabifard called on Iranian officials to keep vigilant against the plots hatched by the enemies to influence and infiltrate the country's decision-making bodies, specially with regard to the Joint Comprehensive Plan of Action (JCPOA). 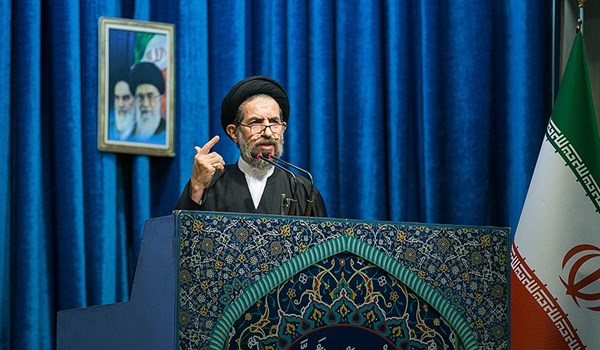 RNA - Addressing a large and fervent congregation of the people in Tehran on Friday, Hojjatoleslam Aboutorabifard said, "Iranians should unite behind the Supreme Leader (of the Islamic Revolution Ayatollah Seyed Ali Khamenei) in order to resist against the enemies."

He stressed the need for Iranian government officials to act in accordance with the Leader’s guidelines.

According to Fars News Agancy, Iran and the six world powers signed the nuclear agreement, also known as the Joint Comprehensive Plan of Action (JCPOA) in July 2015. Under the agreement, Iran accepted to curb its nuclear program in exchange for economic sanctions relief.

US President Donald Trump since his inauguration as the successor of Barack Obama has threatened that he would either kill the JCPOA or make some changes in the deal.

Tags: Tehran's provincial Friday Prayers Leader Hojjatoleslam Seyed Mohammad Hassan Aboutorabifard Tehran Aboutorabi
Short Link rasanews.ir/201pXX
Share
0
Please type in your comments in English.
The comments that contain insults or libel to individuals, ethnicities, or contradictions with the laws of the country and religious teachings will not be disclosed