The enemies desire to separate the people from the Islamic Revolution, the Leader

Rasa – Referring to the conspiracies of the enemies against Iran’s Islamic Revolution, Ayatollah Sa’idi said, “The enemies’ desire to separate the people from the Islamic Revolution and the Supreme Leader will be sent to their graves.” 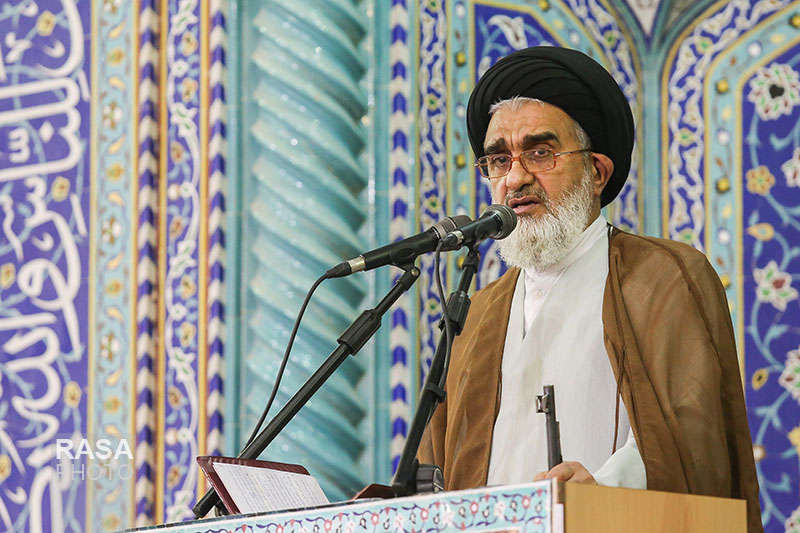 RNA – In his Friday prayer sermon delivered to a large and fervent crowd of believers in Qom’s Qods Prayer Hall, Ayatollah Sayyed Mohammad Sa’idi referred to the upcoming anniversary of Iran’s 1979 Islamic Revolution and said that every revolution has four stages, said, “These steps include the establishment of a revolution, the formation of a government, the completion, and the continuation of the revolution.”

The custodian of the Holy Shrine of Lady Fatimah al-Ma’sumah stated that the existence of divine leadership as one of the factors for the victory of the Islamic Revolution and added, “Religious systems rely on the divine leadership and this duty has been entrusted to a comprehensive jurisprudent in the era of the occultation [of Imam al-Mahdi]. The second factor is shari’ah [religious law] and religion. The contents of the governments of all divine leaders has been shari’ah.”

He explained that opponents of religious governments strongly oppose religion, saying, “From the time that Prophet Muhammad was appointed to his mission until now, the enemies have always disagreed with the implementation of Islamic law and always will be opposed to it.”

Ayatollah Sa’idi continued, “In the contemporary era, the Pahlavi regime sought to prevent Islam through their banning of the hijab, opposition to mourning ceremonies, prevention of expression and establishment of divine law and conflict with the believers. The monarchy was opposed to religion to such an extent that it wouldn’t tolerate the history of the migration of the Prophet [to Madinah].”

The representative of the Supreme Leader of the Islamic Revolution [Ayatollah Sayyed Ali Khamenei] in Qom said that if Imam Khomeyni did not rise up with divine favour, it wouldn’t be clear if anything would remain of Islam today. The Islamic Revolution revived religion and the people and the youth paid more attention to the rulings and slogans of Islam. The rule of the divine leaders, religion and law govern society.”

Ayatollah Sa’idi said, “In stage three of the four stages, the people of Iran accompanied the Wali al-Faqih [Guardian-Jurist] and the Divine Leader with full power and sacrifice. They are the essence of creation, the formation of the government and the fulfillment of the revolution. The dangerous and sensitive rivet of every revolution is the stage of the transition of leadership and this stage usually imposes heavy blows on every revolution but the people, who support Wilayatt al-Faqih and are faithful, are always with Imam Khomeyni and the Supreme Leader.”

Qom’s Friday prayer leader added, “The Assembly of Experts chose Ayatollah Khamenei as the leader in order to complete the movement of Imam Khomeyni and the people who were loyal to the Imam supported him with the same truth and purity. For as long as the enemies of the revolution and those who are malicious towards the people have engaged in sedition and conspiracy, they have faced defeat until today."

Ayatollah Sa’idi noted that in the fourth stage of the revolution – the continuity of the establishment until the reappearance of the Imam of the Time [Imam al-Mahdi] – the enemies and those who are malicious toward the holy Islamic establishment, desire to separate the people from the Islamic Revolution and the Supreme Leader and they will be sent to their graves.”