Rasa - People in different parts of Bahrain took to the streets in solidarity with Ayatollah Shaykh Isa Qassem and other revolutionary figures that are imprisoned by the Al-Khalifa regime. 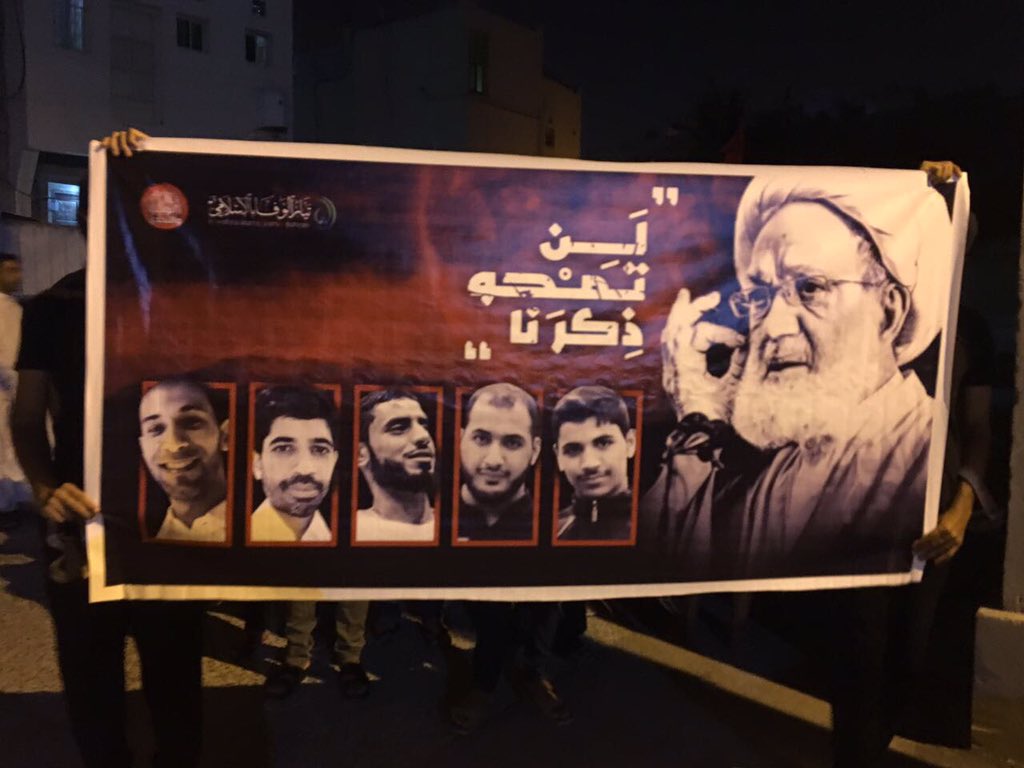 RNA‌ - According to Rasa News Agency, people in different parts of Bahrain took part in mass protests in support of imprisoned revolutionary leaders of Bahrain and condemned of judicial sentences against the political activists.

Demonstrators were holding images of the Bahraini Shiite leader Ayatollah Shaykh Isa Qassim and a number of other clerics who were arrested by the al-Khalifa regime and called for the overthrow of the Al Khalifa dictatorship.

The people of al-Moghasha district, while proclaiming solidarity with political prisoners, emphasized the necessity of continuation of revolutionary demonstrations and movements “until the al-Khalifa regime fully meet their legal demands.”

On the other side of the country, in al-Daya area, the people, “remembering the courage of martyrs who had devoted their lives for the sake of the popular revolution”, strongly condemned al-Khalifa’s crackdown on peaceful protesters and imprisonment and depriving them of their legal rights.

Also in the al-Ma’amir area, which has been witnessing mass protests on a daily basis, al-Khalifa's security forces wounded a number of demonstrators by attacking the revolutionaries who were questioning the fate of the kidnapped revolutionary youth.

Manama has faced popular outrage over its discriminatory policies against the country’s Shia majority since 2011, when a popular uprising began there. The regime has come down hard on the peaceful protests, in a crackdown campaign which has led to dozens of deaths

Bahrain has on numerous occasions blamed Iran for what it calls inciting anti-regime sentiment on the island.

Tehran has reacted strongly to such accusations, saying Bahraini rulers are playing a “blame game” to justify their brutal clampdown on dissent and urging them to stop muffling the voice of protesters.

In an exceptionally controversial move in April, Bahrain’s Parliament authorized military courts to try civilians charged with “terrorism” -- a vaguely defined legal term in the kingdom.

The sentences had been issued for charges of “planting a fake bomb in a private garage in the northern village of Buri on February 15, 2016.”

Three of the convicts are relatives of Sayed Ahmed Alwadaei, a human rights defender and director of advocacy at the Bahrain Institute for Rights and Democracy (BIRD) NGO, who lives in exile in the UK.

London-based rights group Amnesty International described the verdict against Alwadaei’s mother-in-law, brother-in-law and cousin as “a chilling illustration of the extremes to which the authorities are prepared to go to crush dissent.”

It said the charges were “trumped-up” and leveled “after a grossly unfair trial.”

“This sentence should also be a wake-up call for the UK government…it can no longer stay silent over the abuses being committed in the country,” it said in a statement.

Tags: Bahraini Revolution bahrain
Short Link rasanews.ir/201p1z
Share
0
Please type in your comments in English.
The comments that contain insults or libel to individuals, ethnicities, or contradictions with the laws of the country and religious teachings will not be disclosed