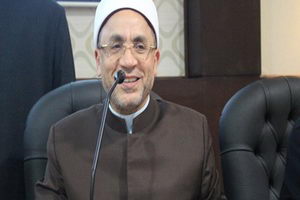 RNA‌ - Mohiyeddin al-Afifi, secretary-general of Egypt's Al-Azhar, the Sunni Muslim world's foremost religious institution, During his visit to the al-Giza area of ​​Egypt met with scholars and seminary students of the region and discussed the strategies and obstacles facing religious preaching.

A review of the activities of fatwas committees, ways to strengthen preaching activities, another part of the program of Mahdiudin al-Afifi on his trip.

The secretary general of Egypt’s Al-Azhar Islamic Research Institute noted that the purpose of establishing various committees of fatwas and dividing them into different provinces was to strengthen the position of the clergy, to determine the duty of each section, to implement the plan to send al-Azhar scholars to the areas where there are many tourists and citizens coming and going, to solve intellectual problems and to correct misconceptions.

He highlighted the need to “make youth's aware of the current situation” as the most important duty of clerics and stated that young clerics can play a significant role in propagating religious concepts.

“Face to face promotion and the nature of physical engagement with people (rather than promoting Islamic concepts through internet and social media) makes the youth actively engaged and connected with the al-Azhar clerics,” he added.

Tags: Mohi el-Din Afifi Shaykh Muhiyiddin Afifi Al-Azhar Cleric
Short Link rasanews.ir/201p1p
Share
0
Please type in your comments in English.
The comments that contain insults or libel to individuals, ethnicities, or contradictions with the laws of the country and religious teachings will not be disclosed