2nd International Convention of Resistance Scholars to be held in Beirut

Rasa – Shaykh Maher Hammoud said, “The Second International Convention of Resistance Scholars is going to be held in Beirut next week. It’s noteworthy that scholars from more than 80 countries will participate in the event.” 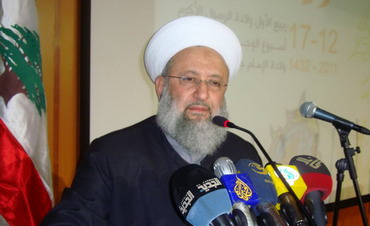 RNA – Speaking at a press conference, Shaykh Maher Hammoud, the head of the Union for Resistance Scholars, announced that the Second International Convention of Resistance Scholars will be held in Beirut, Lebanon on Wednesday and Thursday next week.

The Lebanese Sunni cleric stressed that Muslim scholars from more than 80 countries will attend the event. The theme of this year’s convention is going to be the issue of Palestine and its liberation.

Shaykh Hammoud added, “Scholars from different Islamic countries will be present at the conference. It must be noted that many of these scholars are under heavy crackdown on dissent from their respected governments.”

“These crackdowns are due to the fact that some of these politicians cannot tolerate religious scholars supporting Islamic Resistance. They want clerics to obey their governments and approve of all their atrocities and injustice,” he said.

Shaykh Hammoud concluded, “This international conference will serve as a turning point to pave the way for liberation of Occupied Palestine and it will echo the voice of oppressed Palestinians worldwide.”

Tags: Liberating Palestine Hammoud Lebanon Palestine Maher Hammoud Shaykh Maher Hammoud
Short Link rasanews.ir/201okn
Share
0
Please type in your comments in English.
The comments that contain insults or libel to individuals, ethnicities, or contradictions with the laws of the country and religious teachings will not be disclosed