Judiciary Chief: ISIL Created by US

Rasa - Iran's Judiciary Chief Sadeq Amoli Larijani blasted Washington for terrorism allegations against Tehran, and said the US is itself the mother of terrorist groups in the region, specially the ISIL. 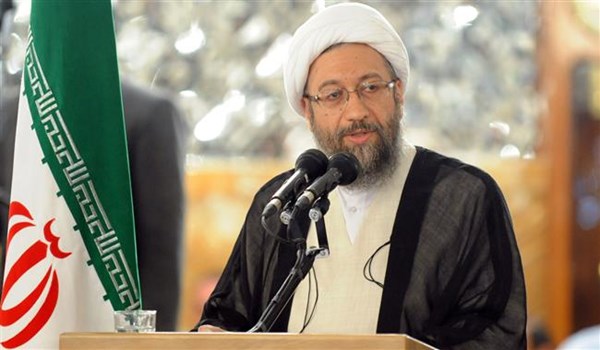 RNA - "The US has created the ISIL and (surprisingly) it accuses Iran of supporting terrorism," Amoli Larijani said, addressing the judiciary officials in Tehran on Monday.

Referring to the US attempts to increase the number of its military bases in the region, he said, "You entered Iraq on the pretext of establishing security but you destroyed all infrastructures and left the ISIL on the ground."

Amoli Larijani also pointed to the US opposition to Iran's missile program, and said, "The Islamic Republic of Iran's missile power is for defense and certainly, we will not hold any negotiation over this issue."

In relevant remarks in June, Deputy Chief of Staff of the Iranian Armed Forces Major General Mostafa Izadi announced that the country is in possession of evidence and documents proving Washington's direct support for the ISIL terrorist group.

"We are facing a proxy warfare in the region as a new trick by the arrogant powers against the Islamic Republic," Izadi said.

"As the Supreme Leader of the Islamic Revolution (Ayatollah Seyed Ali Khamenei) said, we possess documents and information showing the direct supports by the US imperialism for this highly disgusting stream (the ISIL) in the region which has destroyed the Islamic countries and created a wave of massacres and clashes," he added.

Tags: US ISIL Sadeq Amoli Larijani
Short Link rasanews.ir/201ojZ
Share
0
Please type in your comments in English.
The comments that contain insults or libel to individuals, ethnicities, or contradictions with the laws of the country and religious teachings will not be disclosed