Rasa – The head of the Supreme Shi’ah Parliament of Lebanon praised Marzouq al-Ghanim, the Speaker of the Kuwaiti National Assembly, for bold statement against the Zionist delegation to the Inter-Parliamentary Union in in St. Petersburg, Russia. 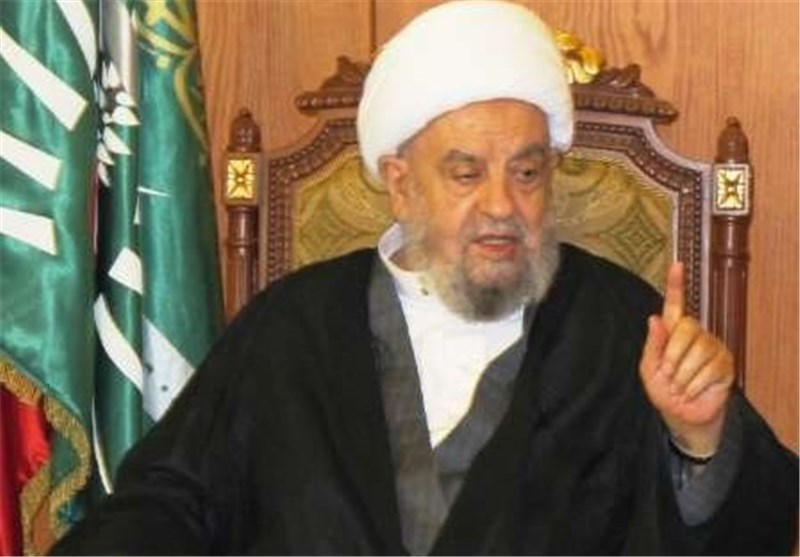 RNA – Ayatollah Abdul-Amir Qabalan, the head of the Supreme Shi’ah Parliament of Lebanon, commended and thanked the Speaker of the Kuwaiti National Assembly, Marzouq al-Ghanim, for his strong stance which led to the delegation of the Zionist regime to the 137th summit of the Inter-Parliamentary Union in in St. Petersburg, Russia to leave the hall in protest.

The statement of His Eminence states, “The brave action of the Speaker of the Kuwaiti National Assembly was an honest interpretation of the voice of all the world’s free champions against Zionist cruelty and tyranny. This brilliant action is worthy of appreciation because it is a cry of truth against Zionist falsehood.”

He added, “The Zionists are continuing their hostility and crimes against Arabs and Muslims and continue to violate all international conventions and practices with continuous crimes against Palestine, Lebanon and Syria.”

Ayatollah Qabalan called on all Arab and Islamic governments and allies to follow the lead of the Speaker of the Kuwaiti National Assembly and to sever relations and to oppose normalization with the Zionist regime saying, “The Zionist regime is the source of corruption and the source of evil and conspiracies against governments and by supporting state terrorism and engaging in murder, displacement and crimes.”

It should be noted that response to the statements of the Speaker of the Israeli Knesset, Yuli-Yoel Edelstein, at the Inter-Parliamentary Union, Marzouq al-Ghanim addressed the Israel delegation at the summit saying, “You are child murderers! Representatives of the occupying parliament, representatives of the most dangerous terrorism! Get out of the hall.”

al-Ghanim, the former head of the Arab Parliament Union, has led a two-year effort to oust the Knesset from the Inter-Parliamentary Union.

After Nachman Shai, the head of the Zionist delegation, vocally objected to a report documenting and heavily criticizing the Zionist regime’s policy of arresting Palestinian lawmakers, he shouted, “The statements of the representative of this occupying regime are in accordance with a parable that everyone in the world knows – ‘if you do not feel shame then do as you please.’ So I say to you get out of here, occupier. If you have an atom of dignity get out of here, you occupier, child killers!”

The Speaker of the Kuwaiti National Assembly then described that which the Zionist representative said “as an example of the world’s most dangerous kind of terrorism – state terrorism.”

Surprising many fellow attendees, al-Ghanim went on to tell Shai, “You should pack your bags and leave this chamber after seeing the reaction [to Israeli actions] from the honourable parliaments of the world.”

Following the remarks by the Speaker of the Kuwaiti National Assembly, the intercession by some Arab delegations and among the encouragement of the participants, the Zionist delegation left the hall.

The Inter-Parliamentary Union was established in 1889 as a global inter-parliamentary institution. Its members currently include members drawn from 173 legislative assemblies around the world.