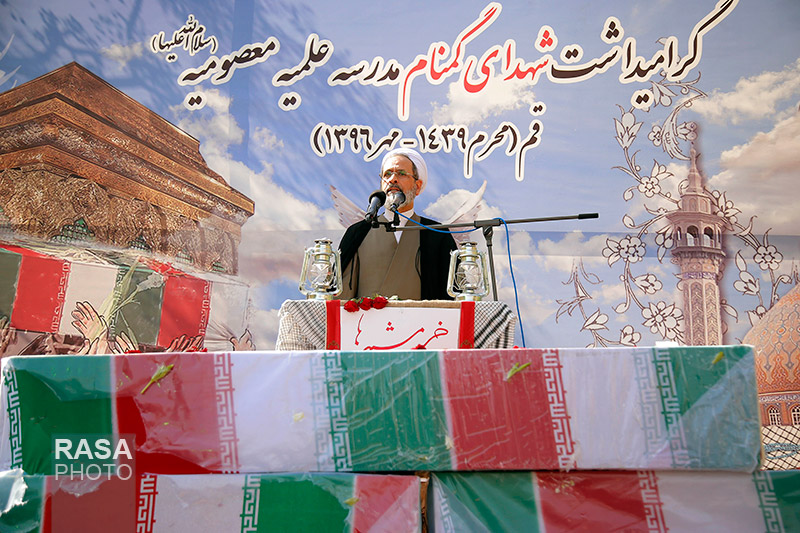 RNA – Speaking at the burial ceremony of the unknown martyrs at Qom’s Ma’soumiyeh Seminary, Ayatollah Alireza Arafi, the director of the Islamic Seminaries of Iran, commemorated the memory of the martyrs from the Iran-Iraq War, said, “Today, the Islamic Seminary of Qom, the revolutionary scholars and seminarians are the hosts of the honourable and proud martyrs.”

Ayatollah Arafi continued, “Due to divine grace, the Islamic Revolution of Iran will remain and the proud martyrs will continue and the Islamic Seminary of Qom was and will be the birthplace of the Revolutionary ideology and the theory of Wilayat al-Faqih [Guardianship of the Jurisprudent].”

“The presence of scholars, seminarians, senior personalities and the leading figures of the Islamic Revolution, such as Ayatollah Mohammad Yazdi, represents the revolutionary passion in the Islamic Seminary,” he added.

The dean of al-Mustafa International University expressed that the martyrs are honoured in the highest heavens and divine kingdom and their burial in the Ma’soumiyeh Seminary indicates the survival of the Islamic Revolution and the merging of the Seminary and clergy with the Revolution.

“The Seminary and clergy are the servants of the nation and the oppressed and will always be present on the scene,” he added.

He said, “Just like before, the Seminary is ready for sacrifice. We will pledge allegiance to Imam al-Mahdi, Imam Khomeyni, the revolutionary martyrs and Supreme Leader of the Revolution and the Seminary and the clergy will remain in the service of Islam and the Seminary will stand alongside the people, the disadvantaged and the poor.”

The Society of Seminary Teachers of Qom pointed out, “The martyrs of the Seminary and the universities show that knowledge is tied to lofty goals and aims. The Seminary will never be separated from the great ideals of the Revolution.”

Ayatollah Arafi added, “The passionate presence of wilayati people of Qom, seminarians and senior personalities in the funeral and burial ceremony is a sign of the spirit of sacrifice that will remain and continue. The message of this presence to the Resistance Front and allies of the Islamic Revolution is that the Revolution and Qom are awake and the Islamic Revolution won’t become antiquated and worn out.”

He said that the Islamic Revolution, which was inspired by Imam Khomeyni and the martyrs, continues its path in a decisive manner with the guidance of the Supreme Leader of the Revolution and the accompaniment of the sources of emulation and senior officials.

“Hezbollah and the Resistance Front must decisively stand up against the imperialist powers and Qom and the Revolution are awake and support them,” he noted.

The head of the Islamic Seminaries of Iran added, “The second message to the authorities of the Islamic system regarding this magnificent ceremony is that they must resist firmly, be decisive and confront the nonsensical statements of the enemies. The Iranian nation won’t retreat and the Seminary will continue on the path of the martyrs alongside the people and the authorities.”

Ayatollah Arafi said that the third message is in regard to the passionate attendance of the people in the burial of the martyrs, noting, “American president [Donald Trump] and his arrogant allies know that they are hated by the people of Iran and other nations and their conspiracies will be in vain.”