Senior Cleric Raps US for Disloyalty to Nuclear Deal

Rasa - Tehran's provisional Friday Prayers Leader Ayatollah Seyed Ahmad Khatami blasted the US for its non-commitment to the nuclear deal with Iran. 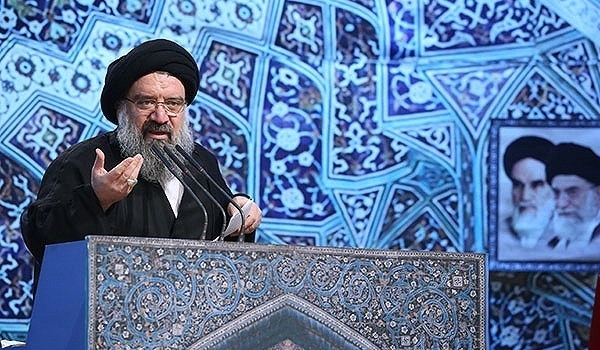 RNA - Addressing a large and fervent congregation of the people on Tehran University campus on Friday, Ayatollah Khatami said, "Our officials have said that the Joint Comprehensive Plan of Action (JCPOA) is not renegotiable; we also support them."

He reiterated that the nuclear deal cannot be renegotiated at all.

In relevant remarks on Wednesday, Iranian Parliament Speaker Ali Larijani dismissed Washington's demand for renegotiating the 2015 nuclear deal between Tehran and the world powers, warning the US that it is paving a wrong path.

"Our negotiations have ended on the nuclear issue and the nuclear deal and the Americans are saying things for bargaining to create more possibilities for themselves, but they are paving a wrong path," Larijani told reporters in the Southern city of Shiraz.

He underlined that if the other side shows disloyalty to the nuclear deal and harms Iran's interests, his country will take appropriate decisions to adopt countermeasures.

His remarks came after Iranian Foreign Minister Mohammad Javad Zarif warned that if the US and other states party to the 2015 nuclear deal defy their undertakings, Tehran will revive its halted or restrained nuclear activities with capabilities more advanced than the pre-agreement era.

“If Europe and Japan and Russia and China decided to go along with the United States, then I think that will be the end of the deal,” Zarif said in an interview with The Guardian and the Financial Times newspapers conducted in New York and published late September.

The Iranian foreign minister warned that if the agreement collapsed, Iran would emerge with more advanced nuclear technology than the pre-nuclear deal era.

However, the top Iranian diplomat insisted that the technology would not be used to make weapons, in line with Tehran’s obligations under the nuclear Non-Proliferation Treaty (NPT).

"The deal allowed Iran to continue its research and development. So we have improved our technological base."

"If we decide to walk away from the deal, we would be walking away with better technology. It will always be peaceful, because membership of the NPT is not dependent on this deal. But we will not observe the limitations that were agreed on as part of the bargain in this deal,” he said.

Zarif stressed that Tehran will only abide by the restrictions under the nuclear deal, known as the Joint Comprehensive Plan of Action (JCPOA), if the other signatories – Britain, France, Germany, Russia and China – all remain committed to the deal and defy any subsequent US sanctions.

“There are other options and those options will depend on how the rest of the international community deals with the United States,” he added.

Tags: Friday prayer Khatami
Short Link rasanews.ir/201ocd
Share
0
Please type in your comments in English.
The comments that contain insults or libel to individuals, ethnicities, or contradictions with the laws of the country and religious teachings will not be disclosed