Al Saud acts in the interest of Israel

Rasa – The Lebanese Shi’ah scholar emphasized, “The Al Saud want to buy people, minds and political options based on the interests of the Zionist regime and this is our problem with Saudi Arabia.” 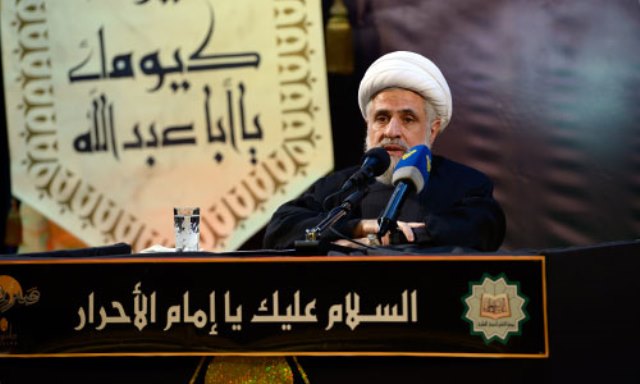 RNA – Speaking at a mourning ceremony hosted by Hezbollah at the Imam al-Husayn in the southern Lebanese city of Tyre, Hujjat al-Islam Na’im Qasim, the Deputy Secretary-General of Hezbollah said, “This great resistance in Lebanon is an exceptional event.”

The Lebanese Shi’ah scholar added, “The liberation of humankind, their culture and their choices are the greatest achievements of the Islamic Resistance [Hezbollah] and today, Lebanon is very different from the era before it was liberated from the occupiers.”

He stressed, “We were weak in Lebanon but now we are seeing a strong Lebanon. We have faced the Zionist regime, which was invincible but it has now become a defeated regime and Lebanon had become a country which suffered crisis after crisis and it was administered by the world’s intelligence agencies but it’s now standing up against them.”

The Lebanese youth prevented the Syrian crisis from entering the country

Referring to the distancing of Lebanon from crises, Hujjat al-Islam Qasim stated that Lebanon didn’t enter the Syrian crisis, although the enemies willed this, but Lebanese youth participated in Syria to prevent the crisis from entering their country.

“Lebanon is now enjoying a state of sovereignty and decision-making, which is one of the blessings of the sacrifices of Islamic Resistance and the equation of the army, nation and the Resistance,” he added.

He emphasized that the Islamic Resistance isn’t fighting the Zionist enemy for metres or kilometres and added, “We’re fighting with the Israeli project, which has a Western cultural and political vision. This regime seeks to change the geography, politics, culture and economy of the region and to destroy our future generations.”

We don’t have sectarian differences with Saudi Arabia

The senior Hezbollah official explained the differences between the Islamic Resistance Axis and Saudi Arabia, saying, “Our problem with Saudi Arabia isn’t because it belongs to a certain sect and this is the last thing we think about. Our disagreement is with the system of government in the country and for this reason, we consider it a tyrannous and repressive regime which seeks to dominate over Yemen after destroying it.”

He emphasized, “The Al Saud want to buy people, minds and political options based on the interests of the Zionist regime and this is our problem with Saudi Arabia. We have no sectarian problem with anyone and just as you see, we are engaging in resistance and jihad alongside the Palestinians.”

Dissension between Hezbollah and the Amal Movement is impossible

The Deputy Secretary-General of Hezbollah described the city of Tyre as the “city of martyrs” and the city of Sayyid Abdul-Husayn Sharafuddin al-Musawi and Imam Musa al-Sadr and said, “This city has always been engaged in cultural, political and military battles with the Zionists and is the pioneer of jihad. Hezbollah and the Amal Movement will continue to work together in various fields and to those who are upset and say that there must be diversity among the Shi’ahs, we say that you must create this diversity.”

Hujjat al-Islam Qasim added, “We demand unity but they want to create discord between us. We have never suffered from discord and Hezbollah and the Amal Movement continue to cooperate against the desires of the spiteful and jealous enemies.”