Senior Cleric Calls On US to Respect JCPOA 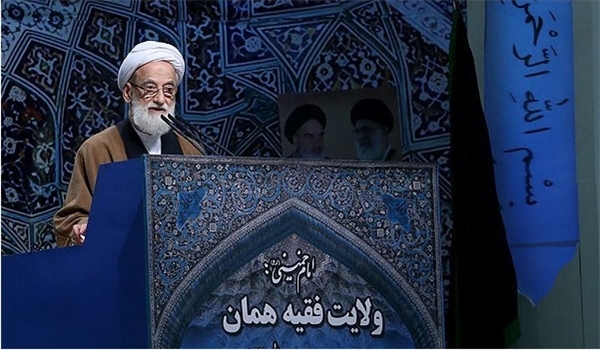 RNA - Addressing a large and fervent congregation of the people on Tehran University Campus, Ayatollah Emami Kashani said, "This man (Trump) has only said nonsense about Iran because he is angry at the resistance shown against the US and its allies; these braveries, altruism and resistance make the US, Israel and Saudi Arabia angry,".

The senior cleric reiterated that the US should respect the nuclear deal with Iran also known as Joint Comprehensive Plan of Action (JCPOA).

In relevant remarks last week, Iranian President Hassan Rouhani lashed out at his US counterpart Donald Trump for his contemptible remarks at the UN General Assembly meeting, stressing that Iran will consider all options if Washington decertifies the 2015 nuclear deal.

“As regards the JCPOA issue, we will be firm and if a person disrupts it, all options will be before us,” President Rouhani said upon arrival in Tehran from New York, where he addressed the 72nd session of the UN General Assembly.

He said that the US was the most isolated country at the UN over its stance on Iran's nuclear accord, citing President Donald Trump’s attack on the agreement while other world leaders defended it.

Trump “spoke against the JCPOA while every one else spoke in favor of the JCPOA at the UN," Rouhani said, referring to the Joint Comprehensive Plan of Action as the nuclear accord is officially called.

The US went against the tide and was “the most isolated country at the UN over the nuclear agreement, which has been certified by the UN,” he added.

During his speech at the UN General Assembly on Tuesday, Trump said the JCPOA was “an embarrassment to the United States” and “one of the worst and most one-sided transactions the United States has ever entered into.”

After Trump’s address, Rouhani said many reporters, officials and European heads of state said explicitly that they opposed the US president’s remarks.

Trump made major mistakes in his speech and leveled “baseless allegations that are beneath the dignity of the United Nations and the person who deems himself the president of a country,” Rouhani added.

He underlined that in his meetings with European officials from France, Britain, Sweden, Belgium and Bulgaria, all stressed that the JCPOA was non-renegotiable and all sides had to implement it.

Tags: US Iran Emami Kashani JCPOA
Short Link rasanews.ir/201oZy
Share
0
Please type in your comments in English.
The comments that contain insults or libel to individuals, ethnicities, or contradictions with the laws of the country and religious teachings will not be disclosed