Rasa – The representative of Ayatollah Isa Qasim referred to the enormous capacity of the Ashura mourning ceremonies and emphasized that Al Khalifah regime is very afraid that religious groups to be the focal point for the fight against oppression. 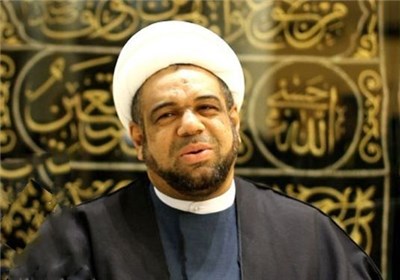 RNA – In an interview with Rasa News Agency, Hujjat al-Islam Abdullah al-Daqqaq, the representative of Ayatollah Isa Qasim in Iran, referred to the role of mourning ceremonies for Imam Husayn in the awakening of the Islamic ummah and said, “After fourteen centuries of Islam, the mourning ceremonies for the Master of the Martyrs’ have been preserved.”

The Bahraini Shi’ah cleric added, “I call on the lecturers and eulogists of the Ahlul-Bayt to emphasize on the slogans of Ashura during the religious ceremonies during the ten days of Muharram because they are religious and denominational symbols which keep Islam alive, just as has been said, ‘Islam came down with the Prophet [Muhammad] and remained with Imam Husayn.’”

He explained the reasons for the arrest of the eulogists and speakers of Imam Husayn by the Al Khalifah regime and added, “No matter how much the Al Khalifah tries to fight the Husayni rituals, the Husayni rituals are continuing to become stronger than before. Everyone who confronted the mourning ceremonies for Imam Husayn and Islamic religious ceremonies has been destroyed. Imam Husayn has always been eternal, just as the poet has said, ‘Death is a lie because Husayn is alive. As time goes by, his name will remain more and more eternal.’”

He added, “The oppressors are afraid that the mourning ceremonies will turn into a million-person strong demonstration that will break the spider’s web. If the rulers were listening to the demands of the people, they would never carry out such criminal acts but rather, they would move in the opposite direction to carry out the demands of the people. Therefore, it is quite natural that they want to take oppressive actions against the Muslim people of the region.”

Referring to the siege against Ayatollah Qasim and his absence at mourning ceremonies, the revered Bahraini cleric stated, “Ayatollah Isa Qasim is not just present in the hearts of all the people of Bahrain but it present tin the hearts of the free people all over the world.”

Hujjat al-Islam al-Daqqaq added, “The officials of the Al Khalifah regime believed that they were able to capture him at one point. They put pressure on Ayatollah Qasim to cause him to retreat from his political record but these actions made Ayatollah Qasim and the people of Bahrain more determined to pursue their demands in a more vigorous manner as they gathered around the religious authorities.”

Describing the position of the King of Bahrain, Hamad ibn Isa Al Khalifah, in the condemnation of those who reject the normalization of relations with Israel, the representative of Ayatollah Qasim in Iran said that a ruler who doesn’t have a propensity towards his people will undoubtedly have an inclination towards foreigners in order to stabilize his throne inside the country.

“The Al Khalifah are trying to draw the attention of the Zionist regime to take advantage of American and British support. History tells us, however, that every king who sewed the seeds of greed towards the foreigners and distances himself from his people didn’t stay in power for a long time,” he added.

Hujjat al-Islam al-Daqqaq stated that the reason for this is that the support of foreign powers for such regimes only remains as long as their interests are secured and whenever the hegemonic powers see that their interests are endangered, they end their support for their puppets.

“We hope Al Khalifah soon realizes that they must rely on the Bahraini people and not on foreigners,” he said.