Kurdish independence referendum does not benefit anyone

Rasa - Head of the Islamic Supreme Council of Iraq noted that the Kurdish independence referendum is not in favor of anyone and will lead to instability in this country. 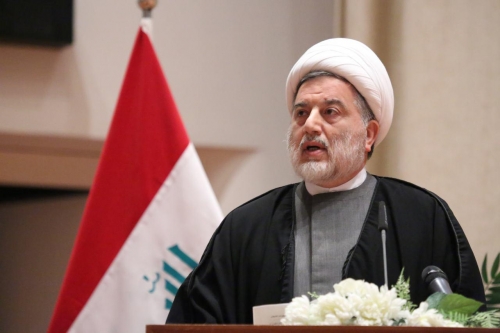 RNA - During a meeting with Russian Ambassador Maxim Maximov in Baghdad, Shaikh Hamam Hamoudi, a senior member of the Iraqi parliament and head of the Islamic Supreme Council of Iraq, said that the referendum on the separation of the Kurdistan region from Iraq should be canceled, adding that officials and people of Iraq must steer clear of any actions that would lead to instability in this country.

He stated that holding a referendum is not in the best interest of anyone, adding, "Trust is a base for understanding and cooperation of officials of the Kurdistan region with the government of Iraq.

The head of the Islamic Supreme Council noted that the complete destruction of ISIS terrorist group should be a top priority for Iraqi people and officials.

The Russian ambassador to Baghdad during the meeting noted that his country wanted unity of Iraq and supports any action that would preserve Iraq’s territorial integrity and solve the problems and disagreements between Baghdad and Erbil.

Tags: Kurdish independence referendum Iraq
Short Link rasanews.ir/201oYT
Share
0
Please type in your comments in English.
The comments that contain insults or libel to individuals, ethnicities, or contradictions with the laws of the country and religious teachings will not be disclosed