‘Imam Husayn changed the meaning of victory and defeat’

Rasa – A Pakistani Shi’ah cleric said that in the Battle of Karbala, Imam Husayn totally changed the meaning to victory and defeat, says a press release. 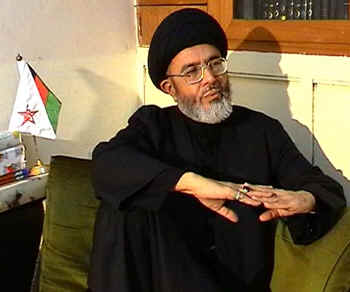 RNA – Speaking at the beginning of the Islamic lunar month of Muharram, wherein Shi’ah Muslims mark the Battle of Karbala which took place fourteen centuries ago, Hujjat al-Islam Agha Sayyed Hamid Ali Shah Mousavi, the Patron-in-Chief of Pakistan’s Supreme Shi’ah Scholars Board and the head of the Tahrik-e Nifaz-e Fiqh Ja’fariyah, said that success is the protection of objectives, even if one loses everything he has, and loosing objectives is defeat, even if one remains successful in protecting everything else.

He stressed that the month of Muharram is the commemoration of the unforgivable events of Karbala, whose every incident gives absolute lessons to humanity to follow.

“Respecting this month because of the incident of Karbala is accepting and elevating the justice of God in its true sense,” he said.

The cleric added that to solve the contemporary problems faced by the humanity, they must follow the path of Imam Husayn.

Tags: Sayyed Hamid Ali Shah Mousavi Pakistani ‌scholar Pakistan Imam Husayn Pakistani Shia Ashura Muharram Husayn
Short Link rasanews.ir/201oY0
Share
0
Please type in your comments in English.
The comments that contain insults or libel to individuals, ethnicities, or contradictions with the laws of the country and religious teachings will not be disclosed