Israel behind crimes against Rohingya Muslims in Myanmar

Rasa - A senior Iranian cleric has called for international action over the major humanitarian crisis unfolding in Myanmar, saying the Israeli regime is behind the violence against the persecuted Rohingya Muslims in Rakhine state. 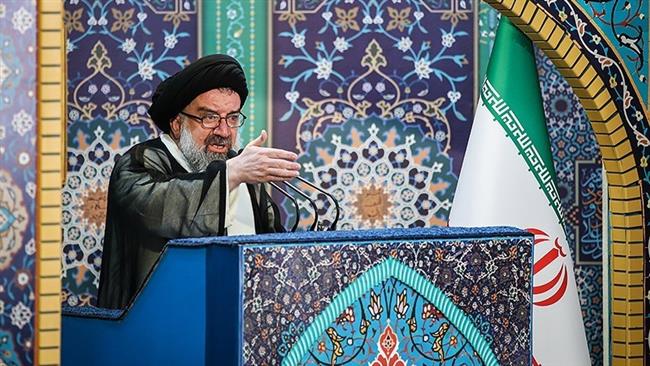 RNA - “Some 400,000 people are killed, beheaded, burnt and displaced which is a big humanitarian crisis. Undoubtedly, the Zionist regime [Israel] is behind all these crimes,” Ayatollah Ahmad Khatami said in a sermon to worshipers at the weekly Friday Prayers in Tehran.

“The story of Myanmar is not religious or ethnic discord but is the story of a government and army which are carrying out ethnic cleansing,” the Iranian cleric said.

He called for more political and economic pressure on the government of Myanmar to stop the brutal crackdown on Rohingya Muslims.

Khatami slammed the silence and inaction of international bodies that carry the name of Islam but bear no resemblance  to Islam.

Leader of the Islamic Revolution Ayatollah Seyyed Ali Khamenei on Tuesday called on Islamic governments to exert political and economic pressure on Myanmar’s “cruel” government to make it stop a deadly crackdown on minority Rohingya Muslims in the Southeast Asian country.

According to a recent report, Israel continues to sell weapons to Myanmar’s military junta despite the ongoing persecution of the Rohingya Muslim minority.

Myanmar’s forces have been attacking Rohingya Muslims and torching their villages in Rakhine since October 2016. The attacks have seen a sharp rise since August 25, following a number of armed attacks on police and military posts in the troubled western state.

Tags: Friday Prayers Ayatollah Ahmad Khatami
Short Link rasanews.ir/201oUg
Share
0
Please type in your comments in English.
The comments that contain insults or libel to individuals, ethnicities, or contradictions with the laws of the country and religious teachings will not be disclosed