Rasa – Hujjat al-Islam al-Qubanchi emphasized that if the security forces and the Popular Mobilization Forces didn’t exist, then now, the Kurdistan Region would under the control of Daesh. 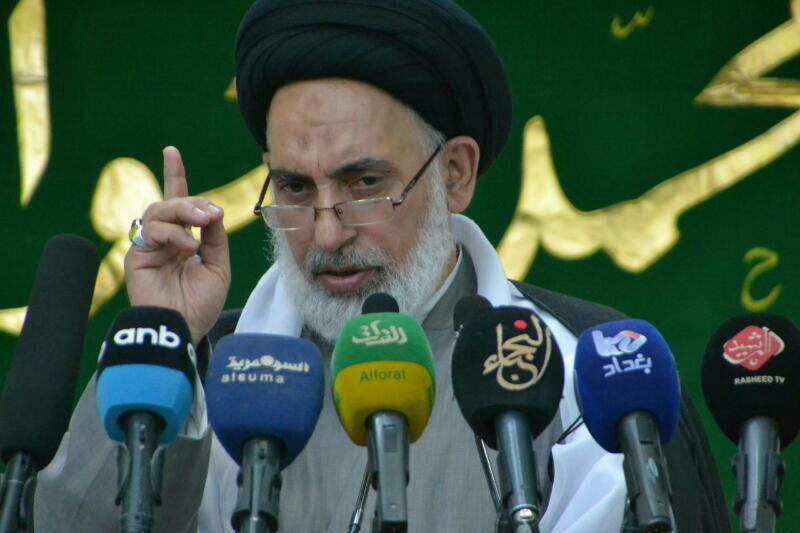 RNA – In his Friday prayer sermon delivered to a large and fervent crowd of believers in the Iraqi city of Najaf’s al-Fatimiyah al-Kubra Husayniyah, Hujjat al-Islam Sayyid Sadruddin al-Qubanchi said that the Iraqi people are waiting for the liberation of the town of al-Hawijah, located in the northern Kirkuk governorate, from the clutches of the Daesh Takfiri terrorist group added that and the armed forces should begin this operation quickly and with power by trusting in God Almighty.

The Iraq Shi’ah cleric also denounced the twin terrorist attacks which killed 84 innocent people and left 93 others wounded near the Iraqi city of Nasiriyah in Iraq’s southern Dhi Qar governorate and said, “Daesh is killing people in retaliation for their defeat and for this reason, the relevant authorities must take the necessary security measures.”

Hujjat al-Islam al-Qubanchi called on officials from the Iraqi Kurdistan Region to reconsider their decision to hold an independence referendum on September 25, saying, “Just as the Iraqi people are now able to defeat the Daesh terrorist phenomenon supported by various countries, now they have the ability to maintain unity and confronting the division of the country.”

He argued that the Kurdistan Region’s plan to separate from Iraq was bound to suffer defeat and added, “The Iraqi people are seeking a rational resolution to this issue through patience, tolerance and prosperity and therefore we invite the various parties to peaceful dialogue.”

His Eminence emphasized that if the security forces and the Popular Mobilization Forces didn’t exist, then now, the Kurdistan Region would under the control of Daesh.

In the part of his Friday prayer sermon focusing on religious affairs, Hujjat al-Islam al-Qubanchi commemorated the day of Mubahilah and said, “The Verse of Mubahilah [Surah Aale Imran, verse 61] and the verse of ‘feeding the poor’ [Surah Insan, verse 9] are verses that refer to the wilayah [guardianship] and the position of Imam Ali and the Shi’ahs use it to prove imamate.”