Rasa – A prominent Shi’ah cleric met with Palestinian delegation to highlight the importance of Palestine and the al-Aqsa Mosque and warned against the expansionist policies of the Zionist regime of Israel. 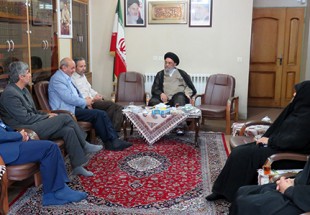 RNA – Ayatollah Sayyed Yousef Tabatabaeinejad, the head of the Islamic Seminary of Esfahan, met with representatives from pro-Palestine group and said that the issue of Palestine is not merely a religious issue and if the world of Islam does not resist against the arrogant Zionists, all Islamic lands will be soon seized.

The secretary of the Society of Defending the Palestinian Nation referred to importance of Palestine and the al-Aqsa Mosque from historical and Islamic aspects and warned against several American military bases in the Middle East and quoted the late founder of Islamic Revolution, Imam Khomeyni, who compared the Zionist regime to a cancerous tumour.

In this meeting, Ayatollah Tabatabaeinejad stressed the role of religious scholars in informing the people and that the anti-Zionist movements will promote mightier and quicker if a solidarity is formed among the people.

The Society of Defending the Palestinian Nation is an Iranian NGO directed by the Zahra Mostafavi, daughter of late Imam Khomeyni.