Rasa – A senior Iranian cleric attending the conference on Islamic denominations in Afghanistan expressed regret that the assets of Muslim world burn in the flames of division. 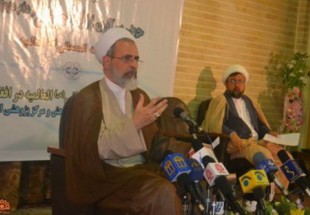 RNA – Ayatollah Ali-Reza Arafi, the head of al-Mustafa International University, said the Muslim world assets are burning in the flames of division vowing that Muslims can heal social damages resulted by diversity of denominations, races and tribes.

He hailed Afghanistan as an outstanding symbol of unity and convergence among Islamic states and said, “Despite all insecurity and problems, Afghan people have maintained their unity and hoisted the flag of convergence and cooperation.”

The cleric assimilated Israel to a cancerous tumor that has seeded the region with division before taking aside for Muslims to kill each other.

“At present, all assets of Muslim world is burning in the flames of disagreement and division,” the head of the Islamic Seminaries of Iran said, stressing solidarity as the healing for religious disagreements.

Mawlawi Abdul-Qadir Ebrahimi, deputy of Afghanistan’s Islamic Fraternity Council, highlighted solidarity, convergence and Islamic proximity as solution against extremism and said, “While Islam is in full contrast with extremism and Takfirism, extremism has brought the toughest damages to Islam.”

He expressed concern over infiltration of deviate thoughts into the academic centres of the country in recent years.

Sayyed Husayn Alemi-Balkhi, the Minister of Refugees and Repatriation, reiterated unity as the best service for all Muslims and called for academic measures and also solidarity against those who excommunicate followers of all denominations.

Kabul has hosted the fifth seminar on “Muslim Scholars in Afghanistan” in line with Islamic proximity, solidarity of Muslims and confrontation with extremism and Takfirism.

Tags: Ayatollah Ali-Reza Arafi Afghanistan Ayatollah Arafi Arafi
Short Link rasanews.ir/201oRS
Share
0
Please type in your comments in English.
The comments that contain insults or libel to individuals, ethnicities, or contradictions with the laws of the country and religious teachings will not be disclosed