90,000 Rohingya Muslims have been displaced in less than ten days

Rasa – Hujjat al-Islam Ja’fari condemned the massacre and genocide of Rohingya Muslims in Myanmar and said that only in the past ten days, most Muslim homes were destroyed in Rakhine State and nearly 90,000 Rohingya Muslims attempted to escape from the country and flee to Bangladesh. 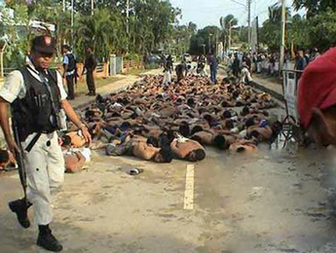 RNA – In an interview with Rasa News Agency, Hujjat al-Islam Sayyed Akhtar Ihsan Ja’fari, the Friday prayer leader of the city of Muzaffarpur in India’s state of Bihar, referred to the harsh conditions facing Rohingya Muslims in Myanmar and condemned the ongoing massacre and genocide of Muslims in Rakhine State and calling for the government of Myanmar to end this cruelty.

The Indian Shi’ah cleric referred to the silence of the world’s organizations in the face of these most heinous massacres against the oppressed children, women and elderly Muslims in this southeast Asian country, saying, “It’s shameful for all human rights organizations that haven’t reacted and have remained silent in the face of this genocide and oppression. This is something questionable for us – for what have the United Nations and human rights organizations been established for? Why don’t they speak about the murderers and oppressors of Myanmar?!”

He stressed on the importance of unity between Muslims and said, “Muslims must abandon their differences and help to protect innocent Muslims and prevent the killing of children and livestock by Buddhists and the ruthless government of Myanmar. For many years, the massacre of Muslims has intensified due to the support of the world powers.”

Referring to the silence of the Organization of Islamic Cooperation, Hujjat al-Islam Ja’fari said, “From this organization of so-called Muslim countries, which were formed under the auspices of Saudi Arabia, no cries or protest were raised. Children, teenagers and Muslim women are being burnt alive and homes are being burnt down but they’re only satisfied by making comments and don’t respond to the government of Myanmar.”

On the other hand, the lecturer in the Islamic Seminary of Lucknow also spoke out on the failure of Saudi Arabia to support the oppressed Muslims of Myanmar and said, “I ask the Al Saud: ‘If you are claiming to be the leader of the Muslims, then why don’t you take action against the government of Myanmar to save the Muslims of Myanmar from this torment? Do you only know the oppression and killing of the people of Yemen? Do you only know how to demolish the homes of the Yemeni people? It’s better to act in regard to the duty of Muslims.”

He said that the silence of the Al Saud in the face of these most heinous massacres suggests their friendship with the Zionists as the Zionist regime is among the supporters of the Myanmarese regime and provides them with weapons so they can continue their crimes.

Hujjat al-Islam Ja’fari also referred to the role of some reactionary states in the region, saying, “Oh Arab and Islamic countries which have established good relations with the United States and the West! Why don’t you use these connections to save Muslims? You only know how to be the house servants and slaves of the United States and Israel.”

The renowned Indian missionary said the kings and rulers of the Islamic world are easily resting in their palaces, but the oppressed Muslims of Myanmar are being slaughtered and killed like animals. Yet, nobody is willing to force the Myanmar government to stop its crimes. What is their sin? What threat to the people who build their homes out of wood and grasses pose to the Myanmar regime that they are being murdered?”

The Friday prayer of Muzaffarpur added that many Rohingya Muslims have died of hunger and many have died on ships because of a lack of water and food just because they were Muslims.

“Is being Muslim a crime? All Muslims are responsible to the Lord. We have a humanitarian duty to help the Muslims of Myanmar,” he stressed.

In conclusion, Hujjat al-Islam Ja’fari said, “Just as the media reported, only in the past ten days, most Muslim homes were destroyed [in Rakhine State] and nearly 90,000 Rohingya Muslims attempted to escape from the country and flee to Bangladesh.”

Tags: Akhtar Ihsan Ja’fari Rakhine Rohingya India Saudi Arabia Myanmar Burma Saudi Rohingyas Saudi Aggression
Short Link rasanews.ir/201oRB
Share
0
Please type in your comments in English.
The comments that contain insults or libel to individuals, ethnicities, or contradictions with the laws of the country and religious teachings will not be disclosed