Rasa - Senior Cleric and Tehran's interim Friday Prayers Leader Ayatollah Mohammad Emami Kashani warned against the plots hatched by Israel and its allies against the Muslims throughout the world. 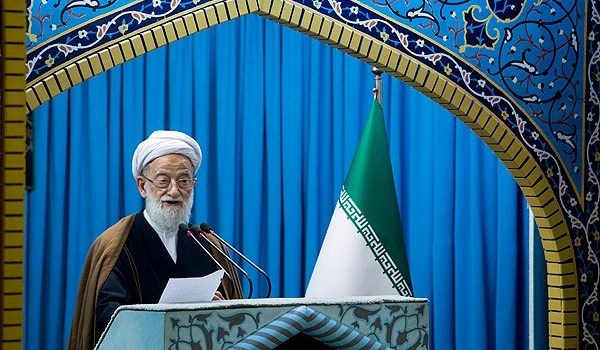 RNA - Addressing a large and fervent congregation of the people at Tehran's Mosalla prayers ground on Friday morning, Ayatollah Emami Khashani said, "The Zionists have disrupted the security of the Muslim world and Muslims should be awakened and do something about their problems."

"Today we see what the Zionists have done in the region and countries like Syria, Palestine and Yemen; what bloodshed and crimes they commit in the Muslim world," he added.

Ayatollah Emami Kashani reiterated that the elites of Muslim world should decide about how to deal with the Israeli regime's plots.

In relevant remarks earlier in August, Lebanese Parliament Speaker Nabih Berri warned that the US and Israel want to disintegrate and weaken the regional states, including Syria.

"Israel along with the US is hatching plots in Southern Syria to disintegrate that country," Berri said in a meeting with the former Iranian foreign minister and Head of Iran's Strategic Foreign Relations Council Seyed Kamal Kharrazi in Tehran on Sunday.

He described Israel as the biggest supporter of terrorism, and expressed concern that today Syria has turned into a game being played by the world powers.

During the meeting, Kharrazi and Berri also discussed the situation in Lebanon, Syria and Iraq.

Berri also voiced pleasure that tensions among the political groups in Lebanon have decreased.

Kharrazi, for his part, called on the regional governments to keep vigilant against enemies' plots, adding that they are seeking to disintegrate Iraq and Syria.

In relevant remarks in March, Syria's Grand Mufti Sheikh Ahmad Badreddin Hassoun warned that the western states, specially the US, are attempting to disintegrate his country by supporting and sending weapons to the terrorists.

He noted that the Christians, Muslims, Jews and Assyrians have been living beside each other peacefully for 100 years in Syria until Britain, France and Germany came to the country and sew discord among them.

Hassoun also referred to the US ominous goals in the region, and said the extremists who are being strengthened by the US and its allies have targeted the friendship bonds among the Muslims, Jews and Christians.

Mekdad said the priority for Damascus is the fight against militant groups "that are supported by the United States, the United Kingdom, France and several states in the Middle East region".

"Now we should focus our diplomatic efforts on finding a solution to this problem. The countries interested in maintaining the crisis in Syria must stop meddling in its internal affairs and must cooperate in combating terrorism," Mekdad said.

Tags: Friday prayer Ayatollah Mohammad Emami Kashani
Short Link rasanews.ir/201oPG
Share
0
Please type in your comments in English.
The comments that contain insults or libel to individuals, ethnicities, or contradictions with the laws of the country and religious teachings will not be disclosed