Iran is not the enemy of the Arab countries

Rasa – Hujjat al-Islam al-Hakim said that Iran isn’t the enemy of Iraq and the Arab countries and the fact that some Arab countries consider Iran as a strategic adversary is completely wrong. 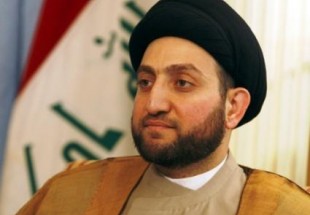 RNA – In an interview with the media, Hujjat al-Islam Sayyid Ammar al-Hakim, the chairman of the Islamic Supreme Council of Iraq, referred to the operation to liberate the northern Iraqi governorate of Nineveh and the city of Mosul and said, “In the past few days, the Popular Mobilization Forces have freed more than 230,000 residents of western part of Nineveh governorate from the clutches of the Daesh Takfiri terrorists and have provided them with basic amenities such as housing and food.”

Hujjat al-Islam al-Hakim said that it’s possible that each group and tribe makes mistakes but mistakes shouldn’t be highlighted or exaggerated in order to create social problems and street protests.

In this fatwa, the senior source of emulation called on Iraqis to take up arms to defend “their country and their people and their holy places” and to join the country’s security forces.

He referred to the plan for national reconciliation in Iraq and said the remnants of Saddam’s Ba’ath Party don’t have any legal means to achieve power in the Iraqi government and they aren’t in present in any position in the government or in any military and political centre.

The chairman of the Islamic Supreme Council of Iraq noted the relations between Iran and Iraq and said, “Iraq has relations with Iran and cooperates with the Iranian government in various fields, including in the cultural, economic, geographic, tourism, combating terrorism and political arenas.”

Hujjat al-Islam al-Hakim added that Iran isn’t the enemy of Iraq and the Arab countries and the fact that some Arab countries consider Iran as a strategic adversary is completely wrong.