Aleppo victory is a turning point in the war against Takfiris

Rasa – Ayatollah Afif al-Nablusi said that the victory of the Resistance Axis in the Syrian city of Aleppo is an important milestone and a turning point in the fight against the Takfiris and their supporters behind the scenes. 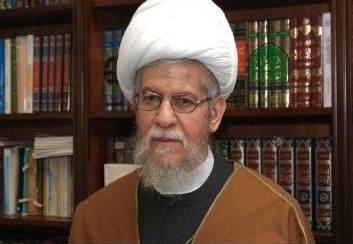 RNA – In an interview with Rasa News Agency, Ayatollah Afif al-Nablusi, a prominent Lebanese Shi’ah scholar and the Friday prayer leader of Sidon, said that which the fighters of the Islamic Resistance have accomplished on the various fronts in Syria, Iraq and Yemen are considered as part of their religious, human and national obligations.

He said that as Muslims, it’s our mission is to defend our country, honour and sanctities and this is what our religion has ordered. The nature of the conflict and the fight against the enemies demands unity among the fighters and resistance fronts.

“Although the Resistance Axis has suffered damage on this path but if we surrender to the enemies, we will face even greater damages and won’t be able to stand up to the enemies for a long time afterwards,” he said.

“The equation is clear – we either defend ourselves against the enemies and prevent them from advancing or surrender to them and be destroyed,” he stressed.

In other remarks, the Lebanese Shi’ah scholar said there is no doubt that the victory of the Resistance Axis in the Syrian city of Aleppo is an important milestone and a turning point in the fight against the Takfiris and their supporters behind the scenes.

“The victory in Aleppo means that the Resistance Axis is advancing and making more achievements. Also, we’re witnessing further achievements by the resistance forces in Mosul,” he said.

Ayatollah al-Nablusi said that the people of Yemen have also achieved great victories and hoped that all these victories are directed at achieving the aims of the Muslim ummah. “Of course, it’s natural that due to these victories, the resistance becomes the target of accusations from other parties, including accusations of committing crimes,” he said.

He added, “In any case, the enemies won’t stop their poisonous propaganda. We have also become used to the lies of the enemies. The Resistance Axis should increase their media capacities in order to publish the truth and expose the enemies’ lies.”

Ayatollah al-Nablusi explained that the oppressed people of Yemen and the brutal war that Saudi Arabia has waged against this nation has been forgotten and neglected by the Muslim world. “They have received little and insignificant support but the people of Yemen have proven that despite this, they are a brave nation and are confident in the face of the enemies,” he added.