Lebanese Sunni cleric stresses solidarity among Muslims under one leadership

Rasa – Shaykh Ahmad al-Zayn in Lebanon attended the ceremony for 38th anniversary of Iran’s Islamic Revolution hailed Iran’s efforts to boost Islamic unity and its struggles to aid the oppressed nations across the globe. 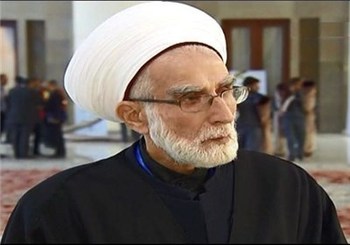 RNA – Shaykh Ahmad al-Zayn, the chairman of the board of trustees of the Society of Muslim Scholars of Lebanon, stressed upon the importance of solidarity among Muslims under the guidance of one leadership and said, “Dissension among Muslims and lack of a council for coordination of Muslim issues have led to increase of the problems.”

The cleric noted that launching a council to discuss the issues of Muslims will enhance the stance of Islamic nations against tyrants and focus the minds on Palestine plight.

Shaykh al-Zayn called the Islamic Revolution in Iran as a victory of humanity against racism and noted, “Iran’s Islamic Revolution is following the project of Islamic unity based on spiritual teachings and struggles in line with settling the disagreements.”

The Sunni scholar praised the late founder of Islamic Revolution, Imam Khomeini, for founding the Society of Muslim Scholars back in 1982 and stressed, “The victory of Islamic Revolution has been an achievement for the whole world of Islam since the uprising is abundant with values and Islamic civilization.”

He highlighted the attention of the Islamic Revolution, under the leadership of the Supreme Leader, Ayatollah Sayyed Ali Khamenei, on the issue of Palestine and added, “Iran is the only country among Muslim and Arab countries that has not admitted the Zionist regime and aids the Palestinian nation.”

Shaykh al-Zayn also criticized the slogans propagated under the name of Islam which do not have anything to do with the holy religion warning that the enemies are using slogans which tarnish the image of Islam.