Iran stronghold of the oppressed of the world

Rasa – Hujjat al-Islam Mirza Yousuf Husayn said, “The revolution of the Islamic Republic of Iran is the stronghold of the oppressed people of the world.” 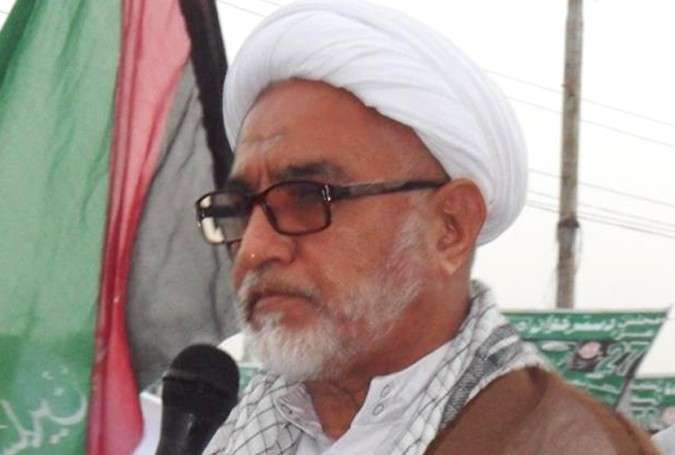 RNA – Speaking at a ceremony held in Pakistan’s largest city of Karachi, Hujjat al-Islam Mirza Yousuf Husayn, the head of the United Scholars Front of Pakistan, referred to Iran’s 1979 Islamic Revolution and said, “The revolution of the Islamic Republic of Iran is the stronghold of the oppressed people of the world.”

The Pakistani Shi’ah scholar noted that some Pakistani politicians have worked to form a secular government in the South Asian country and responded, saying, “The awakening of the people of Pakistan and the consciousness and awareness of its religious leaders will thwart the intentions of the mercenaries of the imperialist powers.”

Hujjat al-Islam Husayn said that by overthrowing the monarchy of Mohammad Reza Pahlavi, the late founder of the Iranian Islamic Revolution, Imam Sayyed Ruhollah Khomeini, established a true Islamic government. “The only country to adhere to the its Islamic system of government after 38 years, is Iran,” he added.

“This is only because of the unparalleled leadership of the Supreme Leader of the Islamic Revolution, Ayatollah Sayyed Ali Khamenei,” he emphasized.

The member of the Majlis Wahdat-e-Muslimeen stated that the due to the Islamic Republic of Iran’s continuous support for the oppressed nations of the world, such as Palestine, Syria and Iraq, the imperialist powers of the world have been overtaken by hatred toward Iran and are always striving to overthrow the country’s Islamic system of government.

Hujjat al-Islam Husayn added that the United States and other powers in the region aim to create and promote sectarianism in Pakistan. “The country needs a revolution similar to the Iranian Revolution so that it can stand against the national and international conspiracies affecting the country.”

Tags: Mirza Yousuf Husayn Pakistani ‌scholar pakistan killing Pakistan Pakistani Shia Majlis Wahdat-e-Muslimeen of Pakistan Pakistani
Short Link rasanews.ir/201nBY
Share
0
Please type in your comments in English.
The comments that contain insults or libel to individuals, ethnicities, or contradictions with the laws of the country and religious teachings will not be disclosed