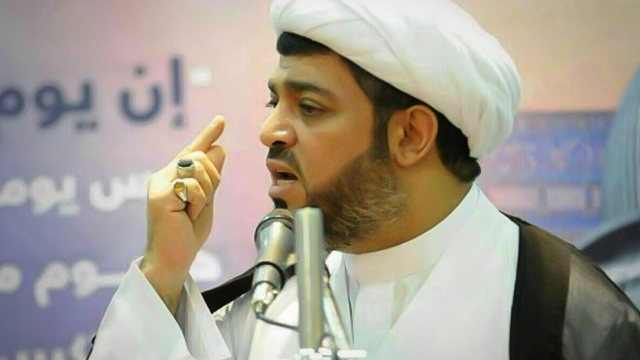 RNA – In a statement, Hujjat al-Islam Husayn al-Dayhi, the Deputy Secretary-General of Bahrain’s al-Wefaq National Islamic Society, strongly condemned the killing of three Bahraini youths by the security forces of the tiny Persian Gulf country’s Al Khalifah regime and said, “The current developments in Bahrain represent the pinnacle of state-sponsored terrorism and unjustified and inhumane violence against innocent civilians.”

“An international investigation committee must be formed to investigate the crimes of the regime,” he added.

The Bahraini cleric pointed out that the Bahraini people are demanding the establishment of democracy, justice and equality which is far from tyranny, oppression and murder and said which is occurring in Bahrain is a national movement in which the people are pursuing their legitimate demands but in response, the regime targets the people with murder, torture in order to escape from the demands of the people.

“The Bahraini regime has no choice but to accept the demands of the people,” Hujjat al-Islam al-Dayhi said.

He said that with the passage of time, it has been proved to everyone that the Bahraini peoples’ movement is completely peaceful and this regime has shot protestors and wounded and martyred groups of them.

“This regime’s actions are completely contrary to logic and reason and demonstrates the regime’s moral and political failure,” the renowned cleric said.

Hujjat al-Islam al-Dayhi emphasized on the fact that bloodshed is only committed by the weak, defeated and those lacking legitimacy and added that the Al Khalifah regime knows nothing but the language of blood, destruction, lies, sectarianism and nationalism against this brave and peace-seeking people.

“All reports published by the regime about the events occurring in Bahrain are full of doubts and even the international community doesn’t believe them,” he said.

The senior member of al-Wefaq said Bahraini people will never accept dictatorship and are always beating drums of freedom and are ready to offer their lives and property in this manner in order to achieve sacrifice and dignity.

Hujjat al-Islam al-Dayhi said the Bahraini people have stood against terrorism, destruction and murder with strength and endurance for the past six years and have beautifully demonstrated their nationalism and love of the land.

In conclusion, His Eminence offered his condolences to the Bahraini people and the free people of the world on the martyrdom of these three youths and said that the blood of these young martyrs who were illegally executed as well as the three youths who were killed last week wasn’t wasted.

Tags: Dayhi Shaykh Husayn al-Dayhi Bahraini Revolution Al-Wefaq Bahrain Islamic Society Bahraini Scholar Bahrainis bahrain
Short Link rasanews.ir/201nA4
Share
0
Please type in your comments in English.
The comments that contain insults or libel to individuals, ethnicities, or contradictions with the laws of the country and religious teachings will not be disclosed