Sayyid al-Hakim calls for the reduction of war damage

Rasa – The chairman of the Islamic Supreme Council of Iraq met with commanders of the operation to liberate Nineveh governorate and called on the warriors to strive to leave behind the least possible damage and dangers for the people. 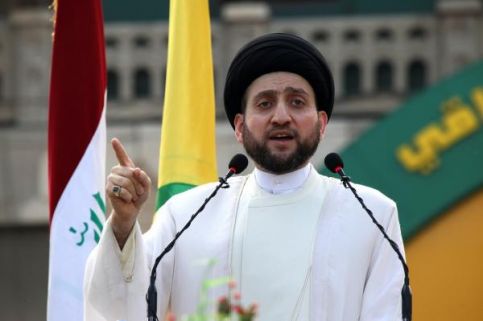 RNA – Speaking at a press conferences after a meeting with commanders of the operation to liberate the northern Iraqi governorate of Nineveh and the country’s second city of Mosul, Hujjat al-Islam Sayyid Ammar al-Hakim, the chairman of the Islamic Supreme Council of Iraq, said, “A military victory in the fight against Daesh will play a major role in improving the internal situation and stability of Iraq.”

The Iraqi cleric said that meeting with members of the Popular Mobilization Forces and Kurdish Peshmerga forces is an honour for all and added, “The purpose of this visit and meeting is to discuss the latest developments in the operation to liberate Mosul and to appreciate these brave warriors in the fight against terrorism.”

Hujjat al-Islam al-Hakim said that the commanders and security forces and Popular Mobilization Forces have the necessities for communication and coordination and stressed that the protection of unity, the defense of the land, the sanctities and the Iraqi people is a source of dignity.

He stated that programs and operations to combat terrorism should be such that our positions and forces work to leave behind the least possible damage and dangers for the people. “Thanks be to God that until now, it has been this way and this issue represents a detailed strategic plan and command,” he said.

Hujjat al-Islam al-Hakim stressed that the National Iraqi Alliance, an Iraqi electoral coalition mainly composed of Shi’ah Islamist parties, along with other political movements, are providing their support for the security forces to combat terrorism and added, “Today, our presence at the headquarters of the operation to liberate Mosul represents the importance of this message.”