Rasa – Ayatollah Nouri-Hamadani said that Imam Khomeini rescued the people from the slavery of tyranny and imperialism and taught them about self-confidence and courage. 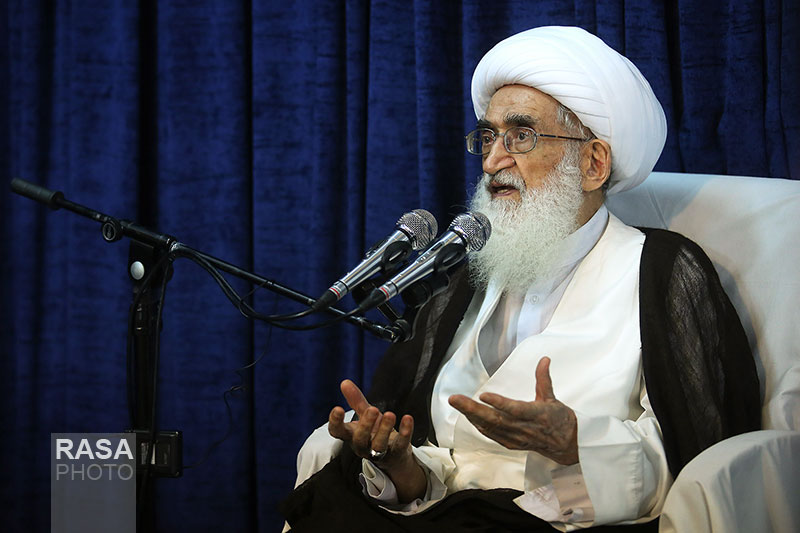 RNA – In a meeting with members of Iran’s security, Basij and Sepah forces, Grand Ayatollah Hoseyn Nouri-Hamadani commemorated the beginning of the “Ten Day Dawn” which marks the anniversary of the victory of Iran’s 1979 Islamic Revolution, and said, “Gratitude for one’s blessings is a human duty which must be recognized in regard to the divine blessings.”

The revered source of emulation said that on these “Days of God,” a great blessing was given to Iran which was the arrival of Imam Khomeini and the establishment of the Islamic Republic of Iran.

He said that the Holy Quran has introduced three groups of enemies of Islam and said, “The first group of enemies are the infidels, who will never be our friends; the second group are the hypocrites with whom we must always be cautious; the third group are the Zionists, who are the most difficult opponents.”

Ayatollah Nouri-Hamadani said during the colonial years before the Islamic Revolution, European and Western powers dominated over Islamic countries, attempted to destroy Islamic culture and identity, hindered the progress of Muslims and they also controlled Iran’s polices and we were dependent on them in the economic arena.

His Eminence said that due to Imam Khomeini’s difficult struggle, once again glory, majesty and power were restored to Islam and pure Muhammadan Islam was again institutionalized in in Iran whereas before the Islamic Revolution, many Muslims didn’t stand up against oppression.

He said that before the Islamic Revolution, the people were the slaves of their masters who didn’t take them into account but Imam Khomeini rescued the people from the slavery of tyranny and imperialism and taught them about self-confidence and courage.

The teacher in the Islamic Seminary of Qom said that Wilayat al-Faqih (Guardianship of the Jurisprudent) is a fundamental pillar of the Islamic Revolution and added that under the Pahlavi regime, the “palace-dwellers” didn’t give importance to the poor slum-dwellers and the people in general but that the Islamic system cares for the slum-dwellers said gives preference to them over the palace-dwellers.

He said that currently there are two alignments in the world – from one side, there are the imperialist powers and the West and on the other side, there was Islam and Muslims and added, “The culture of jihad and martyrdom has eradicated fear from the hearts of Muslims.”

In conclusion, Ayatollah Nouri-Hamadani stressed that we must be firm with the enemies and hypocrites so that they don’t dare act against Islam and Muslims and stated, “The Basij and the Iranian people should support Wilayat al-Faqih with all their might and the people military must protect their military, intellectual and spiritual preparation because this system prepares the groundwork for the emergence of Imam al-Mahdi.”

Tags: Sepah Ayatollah Nouri-Hamadani Iran Ten Day Dawn Nouri Ten-Day Dawn Iranian Revolution Islamic Republic of Iran Islamic Revolution Basij
Short Link rasanews.ir/201n52
Share
0
Please type in your comments in English.
The comments that contain insults or libel to individuals, ethnicities, or contradictions with the laws of the country and religious teachings will not be disclosed