Rasa – Ayatollah Nouri-Hamadani condemned the US’ renewal of its sanctions against Iran and stressed that it is a clear violation of the JCPOA. 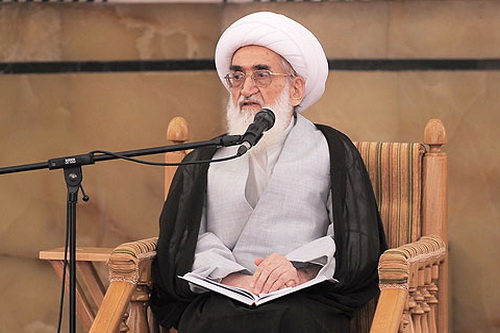 RNA – Speaking during his jurisprudence class at Qom’s Grand Mosque, Grand Ayatollah Hoseyn Nouri-Hamadani condemned the United States’ renewal of the Iran Sanctions Act (ISA) and stressed, “According to the experts, this bill is a clear violation of the Joint Comprehensive Plan of Action (JCPOA).”

He said that lying, deception and deceit are part of the nature of the Americans and added that Iran has been familiar for years with their deceptive and evil nature. “This criminal government has never stopped its dishonesty and hostility against the Islamic Republic and of great nation of Iran for even a moment,” he said.

The renowned scholar added that the US is the same US that has the same vengeful and hostile policies against the Islamic Republic of Iran. “For this reason, the US is not reliable at any time,” he emphasized.

In another part of his lecture, Ayatollah Nouri-Hamadani stressed upon the message offered through the massive presence of the people in the Arba’in pilgrimage and said this showed that this is the culture of the Ahlul-Bayt which can bring happiness to humanity and lead to the glory and greatness of Muslims.

He said another important message of the presence of a large number people in the Arba’in pilgrimage is that the world will know that fighting against injustice, tyranny, arrogance and colonialism as well as defending the oppressed, which is the axis of the prophets and imams, will continue.

Tags: Iran Sanctions Act Ayatollah Nouri-Hamadani sanctions on iran US Iran Nouri-Hamadani Nouri Islamic Republic of Iran USA sanctions
Short Link rasanews.ir/201mhW
Share
0
Please type in your comments in English.
The comments that contain insults or libel to individuals, ethnicities, or contradictions with the laws of the country and religious teachings will not be disclosed