Rasa – Ayatollah Javadi-Amoli said, “According to the Holy Quran, we not only are recommended to like the Ahlul-Bayt, but also in order for a Muslim to realize Quranic guidelines we must love the Ahlul-Bayt.” 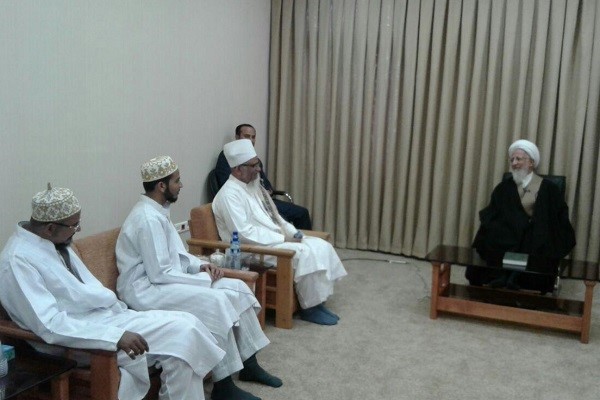 RNA – In a meeting with Mawlana Hatem Zakiyuddin, the 45th Da’i al-Mutlaq, “the absolute or unrestricted missionary,” of the Alavi Bohra, a minority group of Isma’ili Shi’ah Muslims in India, held at Qom’s al-Esra International Institute on Sunday October 30, Grand Ayatollah Abdollah Javadi-Amoli stated that the core of unity among the Muslim community is the Holy Quran as well as the Ahlul-Bayt.

The revered source of emulation added, “Both the Holy Quran and Ahlul-Bayt brought the message of monotheism to mankind and invited them to worship God. If the Muslim community truly adheres to the Ahlul-Bayt and Quranic teachings their actions will lead to Islamic unity and there will be no discord among the Muslim ummah.”

Elsewhere in his remarks, Ayatollah Javadi-Amoli asserted, “The Quran is a manifestation of all that is right and there is no falsehood in it at all. According to Quranic verses, all Muslims are obliged to maintain friendly relationships with one another as a result of their love for the Ahlul-Bayt.”

His Eminence said, “According to the Holy Quran, we not only are recommended to like the Ahlul-Bayt, but also in order for a Muslim to realize Quranic guidelines we must love the Ahlul-Bayt.”

During the meeting, Mawlana Zakiyuddin also expressed his willingness to increase scientific and research cooperation with the al-Esra International Institute.

Tags: Ismaili Bohra Unity India Ayatollah Javadi Javadi Ayatollah Javadi-Amoli Javadi-Amoli Shia Muslim Unity Islamic Unity Interfaith
Short Link rasanews.ir/201mTR
Share
0
Please type in your comments in English.
The comments that contain insults or libel to individuals, ethnicities, or contradictions with the laws of the country and religious teachings will not be disclosed