Rasa – The revered source of emulation said that rumours are being spread and we hear that foreign media outlets have taken advantage of these rumours to create suspicion and mistrust among the people of Iran and stressed that the biggest capital of society is trust and the creation and propagation of rumours undermines public confidence. 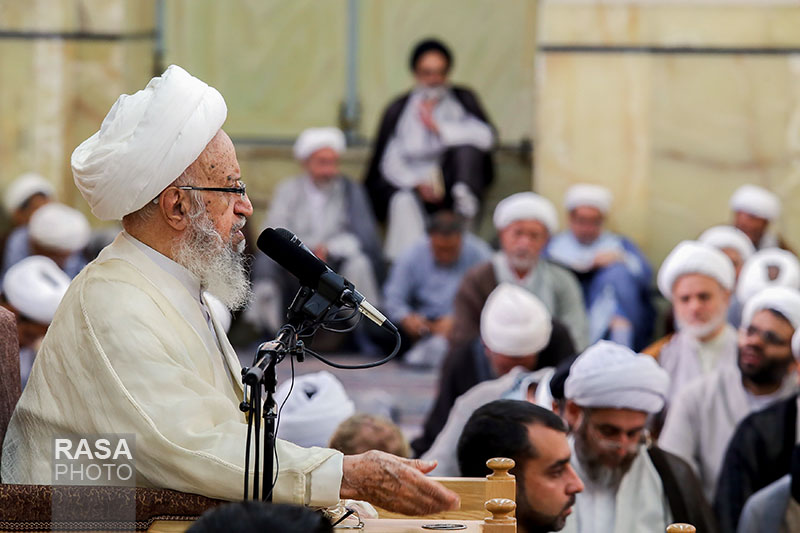 RNA – Speaking during his jurisprudence class at Qom’s Grand Mosque, Grand Ayatollah Naser Makarem-Shirazi referred to verse 19 of Surah al-Nour [“Indeed those who want indecency to spread among the faithful — there is a painful punishment for them in the world and the Hereafter, and God knows and you do not know”] and said now one of the greatest disasters in our society is the creation and spreading of rumours.

“Some create rumours and others spread rumours while this an evil plot and one of the greatest social disasters,” he said.

The revered source of emulation explained the adverse effects associated with the creation of rumours and said that spreading rumours destroys one’s reputation and added, “Sometimes individuals create lies and attribute that which is not true to others.”

He said another one of the adverse effects of gossiping and spreading rumours is the creation of dissension and discord in society and said, “At a time when society needs unity more than ever, unfortunately, one sees that the rumour mill has gone into overdrive.”

Ayatollah Makarem-Shirazi said that in the current era, there are many rumours and lies being spread about others, including about himself.

In this regard, he explained, “We say that until a person’s sins are proven in court, it is not permissible to publicize and express such sins and also spreading others’ sins is considered a sin. Even if we assume that the rumoured sins were actually committed, such sins must be allowed to be proven in court and of course, we must not insist on it spreading such rumours.”

His Eminence added that we are witnessing that rumours are being spread and we hear that American, British and other foreign media outlets have taken advantage of these rumours to create suspicion and mistrust among the people of Iran and stressed that the biggest capital of society is trust and the creation and propagation of rumours undermines public confidence.

The teacher in the Islamic Seminary of Qom also noted that today, some people are oblivious to Islamic teachings and consider it civilization and freedom while at the same time considering those who adhere to domestic issues as backwards.