The youth must take advantage out of Ahlul-Bayt’s teachings

Rasa – In a meeting with a group of young Muslim students, Ayatollah al-Hakim advised them to make the most out of Ahlul-Bayt’s teachings. 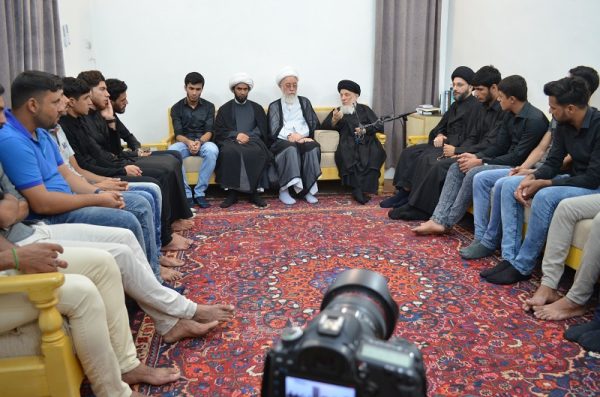 RNA – In a meeting with a group of young Muslim students, Grand Ayatollah Sayyid Muhammad Said al-Hakim, an Iraqi Shi’ah source of emulation, expressed his happiness regarding the Muslim students' devotion to their religious affairs and beliefs.

His Eminence added, “During these days we are mourning over the great tragedy of Karbala, it is our duty to remember the Ahlul-Bayt’s sufferings and sacrifices for Islam, particularly those of Imam Husayn, who sacrificed his own life, his family and all of his companions’ lives to denounce the oppressive rulers of his time and make the people realize that their government was not Islamic at all.”

The senior cleric further added, “Imam Husayn’s uprising was aimed at defining the true form of Islamic government and law. He wanted people to understand that Yazid’s government has nothing to do with genuine Islam and its teachings but his enemies revolted against Imam Husayn and eventually martyred him. This tragedy took place while his adversaries claimed they believed in Islam but actually they were its enemies.”

Tags: Muhammad Sa’id al-Hakim karbala Husayn Iraq Hakim Ayatollah al-Hakim
Short Link rasanews.ir/201mRY
Share
0
Please type in your comments in English.
The comments that contain insults or libel to individuals, ethnicities, or contradictions with the laws of the country and religious teachings will not be disclosed