West accuses Iran of supporting terrorism because of their political interests

Rasa – Ayatollah Makarem-Shirazi emphasized that the enemies’ spread propaganda against the Islamic Republic of Iran and accuse Iran of supporting terrorism and said they see their political interests in this matter while all their words are lies. 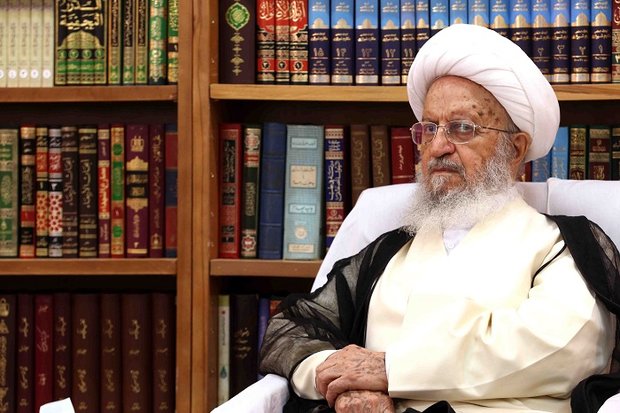 RNA – Muammer Karabulut, the head of the World Peace Village in Cyprus and Ali Shakeri, the ambassador of the Islamic Republic of Iran to the World Peace Village, along with two representatives of the organization, met with Grand Ayatollah Naser Makarem-Shirazi has the home of revered Shi’ah source of emulation at His Eminence’s home in the Iranian holy city of Qom.

World Peace Village is a non-profit organization that hosts multicultural day and week peace camps that welcomes children from all spiritual and cultural traditions. Their mission is to teach the messages and practices of non-violence and peacemaking from various world traditions in a fun and cooperative atmosphere.

During the meeting, Ayatollah Makarem-Shirazi explained that those working for this organization are following a blessed goal which should be appreciated and said the most important issue for people in the world today peace because every problem that exists in the world is due to war, conflict, destruction and bloodshed.

His Eminence added that if peace was to prevail in the world, the amount of capital used to purchase weaponry for war could be used for development and prosperity in the world and added, “For this reason, not only Muslims but all wise people, should be advocates of peace. Islam, especially, gives great importance to peace and reconciliation, which incidentally is the same message and injunction of the Holy Quran.”

Ayatollah Makarem-Shirazi said that one of commandments of Islam is that it is obligatory for Muslims to help anyone, anywhere in the world, either they are Muslim or not. We stand against the Takfiri terrorists who advocate war, bloodshed and destruction.

“For this reason therefore, we held two large conferences and invited scholars from eighty countries to demonstrate the true face of Islam to the world and we stated that Islam is a religion of love, affection and intimacy,” he said.

He emphasized that the enemies’ spread propaganda against the Islamic Republic of Iran and accuse Iran of supporting terrorism because they see their political interests in this matter while all their words are lies.

“When someone comes into our country and sees various religions living together in peace and friendship and have representatives in parliament, the false statements of the enemies become more distinctive,” the revered scholar noted.

In conclusion, Ayatollah Makarem-Shirazi said: “We are in favour of peace and we extend our hand of friendship to whoever speaks of peace and we do not have any doubt in this matter. For the same reason that you are taking steps toward peace and friendship, we consider you as our friends.”

Tags: World Peace Village Makarem Ayatollah Makarem-Shirazi Interfaith
Short Link rasanews.ir/201mPk
Share
0
Please type in your comments in English.
The comments that contain insults or libel to individuals, ethnicities, or contradictions with the laws of the country and religious teachings will not be disclosed