Hezbollah not to flinch from its duties in Syria

Rasa – Hujjat al-Islam Naim Qasim said, “Despite the price we pay, we will not flinch from our duties in Syria and will continue to fight the Takfiri terrorists.” 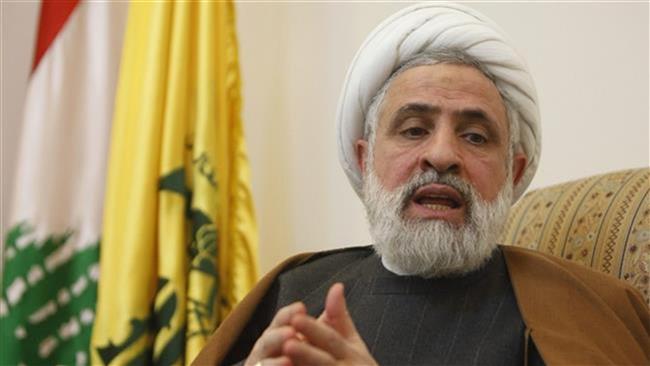 RNA – In a meeting with the family of Martyr Hatem Hammadi, who was martyred in Syria, in the Lebanese village of al-Qamatiyeh, Hujjat al-Islam Naim Qasim, the Deputy Secretary-General of the Lebanese Islamic Resistance group, Hezbollah, said that the “great” Martyr Hammadi was one of commanders who achieved the best fate despite numerous injuries in the fight against the Zionist regime and Takfiri groups in different areas of the war-torn Arab country and he demonstrated great sacrifices.

The senior member of Hezbollah added that he had an great history of engaging in jihad and was able to be an effective warrior and in two dimensions – military progress and martyrdom.

He described said that the loss of leaders is an integral part of the price that must be paid in order to achieve victory and to achieve the goals of the Islamic ummah and said, “The loss of leaders cannot be considered a loss in the direct sense of the term because they remained steadfast on the path of jihad and achieved their desired result.”

Hujjat al-Islam Qasim said that in Syria, Hezbollah and its allies have been able to stand against the imperialist powers of the world and prevent the overthrow of the resistant Syrian government, which would only benefit the Zionist regime.

His Eminence explained that the enemies of the achievements of Hezbollah and its allies have been frustrated and have let out screams and moans of anger over these achievements and added, “Despite the price we pay, we will not flinch from our duties in Syria and will continue to fight the Takfiri terrorists.”

“Our youth and our families emphasize the importance of achieving victory and not allowing Takfiri groups to achieve their goals,” he said.

In conclusion, Hujjat al-Islam Qasim said: “We know well that the path to solving the crisis in Syria will take a long time, thus, to those who are awaiting our exhaustion and backing down, we stress that we do not accept exhaustion and we also emphasize that we do not fear tireless dedication.”

Tags: Takfiri Terrorism Naim ‌Qasim Takfiri Syria syrian crisis Takfir Lebanon Hezbollah Syria developments Takfirism
Short Link rasanews.ir/201mPP
Share
0
Please type in your comments in English.
The comments that contain insults or libel to individuals, ethnicities, or contradictions with the laws of the country and religious teachings will not be disclosed