Rasa – Ayatollah Makarem-Shirazi said that Hillary Clinton and Donald Trump seek to become the leader of one of the greatest countries in the world which also claims be to the leader of the world. “This is the scandal of Western democracy,” he said. 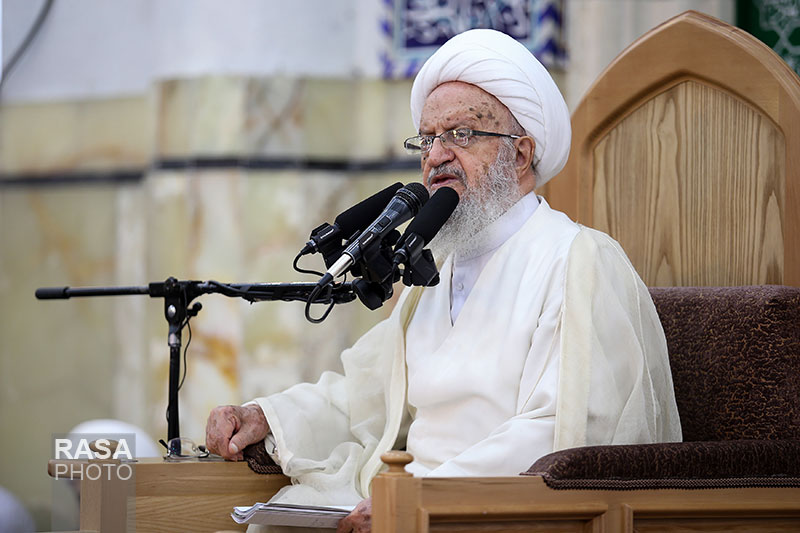 RNA – Speaking during his jurisprudence class at Qom’s Grand Mosque, Grand Ayatollah Makarem-Shirazi criticized the actions committed in the name of Islam but which are against the roots of the religion, saying, “Contrary to what the Wahhabi-Takfiri-Daesh blind-hearted charlatans have stated and contrary to what the crimes that they have committed demonstrate, Islam is a religion of mercy and not a religion of violence and extremism.”

The revered source of emulation added that this phenomenon is being exposed and God-willing, their evil will be eliminated from the world, particularly from the Islamic world.

He said that for many years the West has hidden its true face under the cover of human rights, democracy, respect for the people’s vote and the like but in recent years, they have cast many veils aside and their true nature has been revealed.

Ayatollah Makarem-Shirazi criticized the hypocritical behaviour of the United States in various fields, particularly in regard to combating terrorism and said, “Supposedly, the US has formed a coalition to fight Daesh in Iraq but now that Iraq wants to retake Mosul from Daesh, it is said that the US is helping Daesh terrorists flee to Syria.”

His Eminence said that another issue that shows the true face of the US is their support of the crimes of the Saudi regime in Yemen. “This is because the money of these criminals is stored in American banks and they do not want to lose it,” he added.

The disgrace of Western democracy

In other remarks, he referred to Hillary Clinton and Donald Trump, the two American presidential candidates, and added that these two individuals seek to become the leader of one of the greatest countries in the world which also claims be to the leader of the world. “This is the scandal of Western democracy,” he said.

Ayatollah Makarem-Shirazi noted that there was a time in our country where some wished to be like the West and the Americans and to have a similar democracy to American democracy in Iran but now the veil has been removed and the facts have been made clear to everyone.

Westerners do not adhere to their commitments

He stressed that we must not fall to the deceptions of Western civilization and democracy, adding, “They are not loyal and they do not adhere to their commitments and they are not committed to the human rights despite it being one of their slogans. Unfortunately, there are still some who are enamoured with the West.”